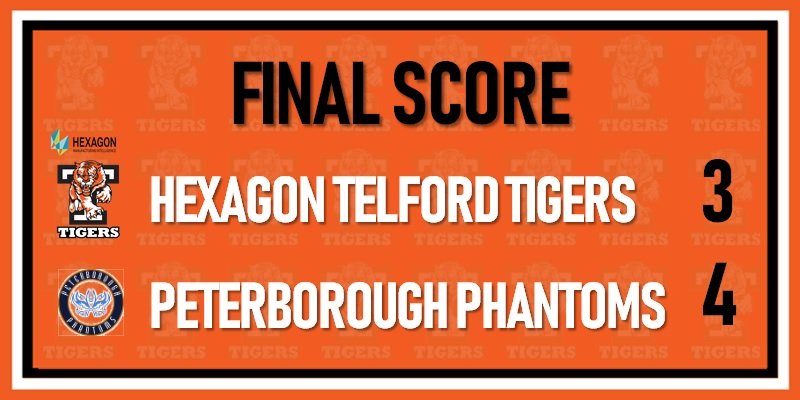 The Hexagon Telford Tigers 1 faced off against Peterborough Phantoms on Sunday night at Telford Ice Rink in the second of back to back Autumn Cup games. Tigers had lost the previous evening in Peterborough 3-1, with Tigers’ goal coming from Scott McKenzie and eventually would fall to their 2nd Cup Defeat.

Tigers lined up without Jonathan Weaver and Joe Aston for the 2nd game running and started slowly, with Peterborough first to every puck in the opening stages. It was no surprise when the visitors opened the scoring in the 5th minute through Ales Padelek. Tigers went further behind in the 7th minute, whilst Peterborough were on a power play after Jack Watkins had taken a roughing penalty. Corey McEwen fired a shot from distance that deceived Tigers’ net minder Denis Bell to put Tigers 2-0 down.  As the period progressed, Tigers started to find their feet and pulled a goal back in the 13th minute. Brodie Jesson broke into the Peterborough defensive zone and threaded a perfect pass to the unmarked Jason Silverthorn, who made no mistake with a precise wrist shot.

Tigers ended the period on the penalty kill again after Andy McKinney was given a 10 minute misconduct for boarding, meaning the Phantoms would start the 2nd period with a minute and a half of a power play.

Tigers successfully killed the penalty and scored the equaliser in the 25th minute. Dan Mitchell led a breakaway and passed to Warren Tait who slammed an unstoppable shot past Jordan Marr in the Peterborough goal.

Tigers had a chance to break the deadlock in the 33rd minute when Peterborough’s Harry Ferguson and James Ferrara were both sent to the penalty box, giving Tigers a 5 on 3 power play. Despite Tigers retaining the puck well in the offensive zone, they could not score. Tigers then lost Jason Silverthorn through injury after he was cut by an errant Peterborough high stick, which was missed by referee Matthews. Silverthorn was forced to leave the game and was unable to return.

A further chance to take the lead came whilst Tigers were killing a Scott McKenzie slashing penalty, Adam Taylor had a short handed breakaway but his shot was well saved by Marr, to leave the teams level at the end of the 2nd period.

Tigers took the lead in the 44th minute with a superb goal. Adam Taylor passed to Ricky Plant, who weaved his way past the Peterborough defence and dummied the net minder, sending him the wrong way, before sliding the puck into the net. But Tigers’ lead would be short lived as Glenn Billing’s shot beat Bell down low to tie the game at 3-3. Tigers were then caught out whilst on the power play. Tigers lost the puck in the Peterborough zone and Petr Stepanek went clear with a 1 on 1 chance. Bell saved the initial shot but Stepanek forced home the rebound to put the Phantoms back in front. The goal would prove to be the winner, despite Tigers spending the final 4 minutes of the game on the power play after Ferguson was given a match penalty for high sticks. Tigers pulled net minder Bell for the final minute to have a 6 on 4 advantage but could not score.

After the game Coach Tom Watkins said, “We deserved something from the game in my opinion. We worked hard, created chances and showed good character to lead after falling behind to a couple of goals. We conceded some soft goals and our power play was a joke. We scored zero from eight opportunities, with a 5 on 3 power play and a 5 minute power play, but we showed no composure, no poise and we continually allowed ourselves to get outnumbered.

Watkins added, “Goaltending is such an important position, make a mistake and it hurts the team.  We need much more consistency in that department. We know how good Denis can be but at the minute he’s not performing to the level he can. He’s got to battle through it, work hard and fight for every puck. It’s not all negative though as I thought 5 on 5 we were excellent, dominated the second period and played with lots of energy and presence throughout the evening. “