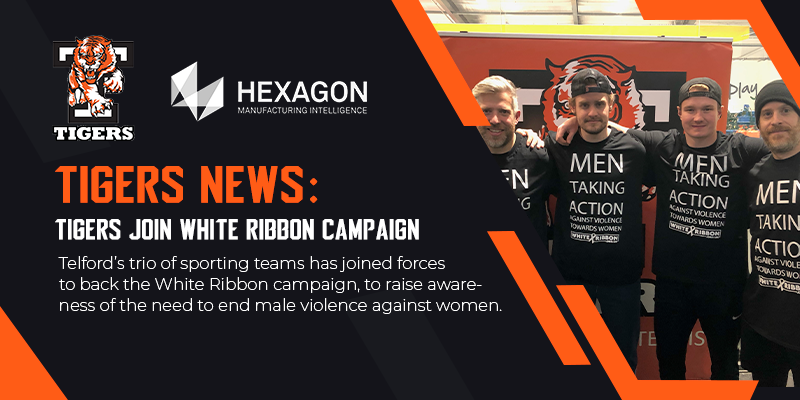 Tigers Join White Ribbon Campaign. Telford’s trio of sporting teams has joined forces to back the White Ribbon campaign, to raise awareness of the need to end male violence against women.

White Ribbon Day is marked around the world annually, on 25th November, and is the largest global initiative to end male violence against women by calling on men to take action to make a difference.

AFC Telford United, Hexagon Telford Tigers and Telford Hornets have all stepped up, backing the message that #AllMenCan.

Luke Shelley, AFC Telford United football operations manager said “As a club, we believe it’s important to take this real opportunity, to get the message out that male violence against women must end.”

“All men can make a difference by thinking of their own behaviour and being prepared to call out sexist and harassing behaviour when they see it. Along with White Ribbon UK, we want to encourage all men to listen to women and learn to be allies, so that we can end violence against women once and for all.”

“We want to use our position to state that men who use violence towards women are on thin ice. It can stop, and it must stop, but that can only happen if we listen to women’s voices on this, and take action rather than standing by.”

Neil Thomas from Telford Hornets rugby team explained that the Hornets were only too happy to play their part also:

“There is no room in today’s society for domestic or any other type of male violence against girls and women. Telford Hornets RFC is proud as it fully supports White Ribbon Day and stands shoulder to shoulder with the town’s other sporting partners.”

Lyn Stepanian, of Telford and Wrekin Council, welcomed their support:

“On behalf of our local White Ribbon steering group a huge vote of thanks to our trio of sporting teams. They are truly a demonstration of how all men can and should stand up to make a difference. They have definitely scored and tried in supporting this important campaign.”

White Ribbon Day marks the start of a further 16 days of action within the Borough, with various speakers sharing their lived experience of domestic abuse, to further raise awareness. There will also be a focus on the child to parent abuse, male victims of abuse, elder abuse and the abuse suffered by those within the LGBTQ+ community.

On White Ribbon Day Thursday 25 November, and in the 16 days that follow, White Ribbon UK is asking people in their communities, organisations and workplaces, to come together, and say ‘no’ to violence against women.

Because of thousands of people like you, we can get the message out that men’s violence against women and girls must end. And that all men can make a difference.

#AllMenCan is White Ribbon UK’s leading message this year. It was developed in March when the murder of Sarah Everard brought women’s experience of men’s violence to the forefront of everyone’s minds. It also opened up so many conversations about men taking action and making a stand. As we move towards the end of the year we want as many men as possible to think carefully and make the White Ribbon Promise to never commit, excuse, or remain silent about male violence against women.

People are invited to wear a White Ribbon and make the White Ribbon Promise to never commit, excuse, or remain silent about male violence against women https://www.whiteribbon.org.uk/promise