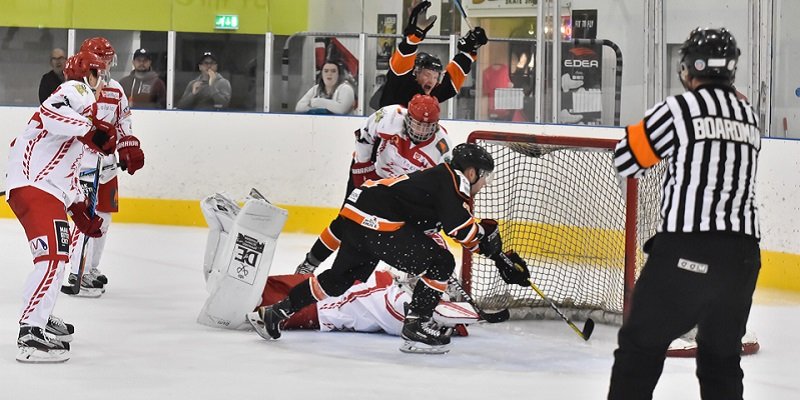 Telford Tigers 1 took on former EPL rivals Swindon Wildcats on Sunday night at Telford Ice Rink. After beating Solway Sharks 5-3 in the NIHL Moralee Division game on Saturday, the Tigers turned to NIHL Cup action. Tigers had started Pool D with back to back victories over Basingstoke Bison and went into the game with a perfect record so far this season.

The first period started badly for the Tigers with Swindon taking the lead in the second minute when Luc Johnson deflected a Tomas Rutkis shot past Dennis Bell in the Tigers’ goal. Things got worse shortly after when Tigers’ Jordan Stokes was called for hooking and Swindon scored their second goal of the night, on the power play, Sam Bullas tipping Jan Kostal’s shot past Bell who could do nothing to stop it. Tigers responded with a goal of their own in the eleventh minute in a bizarre way. Swindon appeared to have prevented Jack Watkins from getting his shot away, but a Wildcats’ defender, in trying to clear the puck, poked it into his own net. Watkins getting credit for the goal as the last Tigers’ player to touch the puck. The period ended in controversial fashion with Tigers’ Great Britain international defender Jonathan Weaver being ejected from the game and given a five minute match penalty for roughing, resulting in Tigers being a man down for the final minute of the period and the first four minutes of the second.

The penalty would prove to be crucial as Swindon scored in the second minute of the second period, with a power play goal from Jordan Kelsall to lead three one and despite, some heroics by Bell in the Tigers’ goal, a fourth was scored in the thirty second minute when an unlucky bounce off the post left Chris Jones an empty net to tap into, leaving Tigers a mountain to climb in the third period.

Tigers could not add to their tally, with Swindon shutting down the Tigers’ offence in the final period and seeing out the game to hand the team their first defeat of the season.

Man of the match – Danny Rose

After the game Telford Tigers’ Player Coach Tom Watkins said “Today was a tough game against a team that are organised and tough to break down, I’d expect Swindon to go on and win something this season, with the line up they have got. I thought we battled hard but the loss of Weaver hurt us because he is a key player for us and we were already short benched. I was disappointed with the third goal we gave up, it was a soft goal and changed the tide and we didn’t have the legs to get back into the game.

Watkins also said “We have got a couple of offers in to players and hopefully we will know more on Monday, it’s important that we add to the team, we don’t want to be in a place where we are playing short. We have had to overplay players and we can’t do that all season.