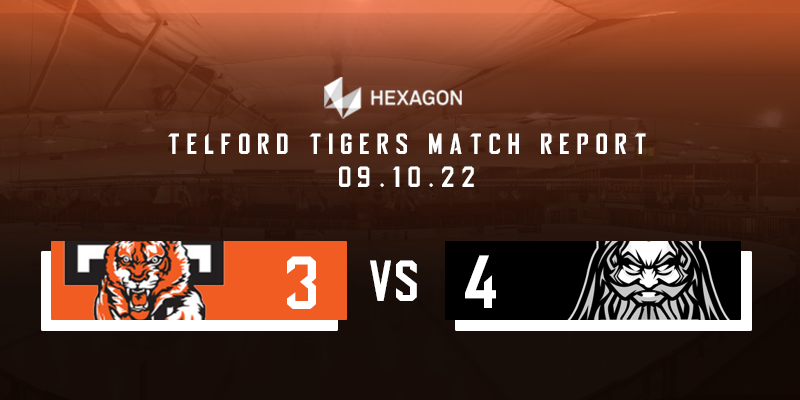 Tigers Narrow Loss. Hexagon Telford Tigers returned to home ice after a road victory over Sheffield Steeldogs the previous evening. Milton Keynes came into the game with a perfect record having won all six of their games so far this season, meaning Telford would have a tough task to win the game.

The opening period saw end-to-end action with both teams showing their prowess in front of the goal. Tigers struck first in the fifth minute of the game. Fin Howells sent Scott McKenzie in on goal allowing the Tigers’ forward to shoot low at Jordan Hedley in the Lightning goal. The puck rebounded perfectly to Vladimir Luka who was waiting in the right circle to hammer the rebound into the open net.

Milton Keynes was handed a glorious chance of an equaliser when Corey Goodison was called for boarding, closely followed by McKenzie for tripping, giving Milton Keynes an extended 5-on-3 power play. Halfway through the penalties, Sam Watkins battled out of his own defensive zone and broke away on the Milton Keynes goal, as he was about to shoot he was hooked and a penalty shot was awarded to Telford. Luka took the penalty shot but his low wrist shot went wide of the goal. Milton Keynes then equalised when Tigers got one player back from the penalty box. Sean Norris’ shot was tipped past Brad Day by Tim Wallace to draw the sides level.

Telford then had a power play chance of their own when Leigh Jamieson was awarded a high sticking penalty. But, disaster struck for Telford when Liam Stewart broke away short-handed and shot low past Day to put the Lightning ahead. Less than a minute later, Telford were level. A scramble in front of Hedley’s goal saw the puck land perfectly for Howells to slam it home and put Tigers back level.

Telford were the better team for much of the second period and were unlucky not to score on a couple of occasions. Lucas Price was closest to scoring but Hedley stopped his breakaway chance. Despite Tigers having most of the pressure on the Milton Keynes goal, it would be the Lightning that would score next. Tigers’ defence were caught flatfooted, allowing Sam Talbot a breakaway which he scored with a backhanded shot over Day’s blocker.

Tigers power play got another chance when Rio Grinell-Parke was called for hooking. As the power play ended and Grinell-Parke came out of the penalty box, Telford still had possession of the puck in the Lightning defensive zone. Danny Rose circled the net and sent the puck in front of the goal for Bayley Harewood to shoot through Hedley and into the back of the net to equalise.

The game was decided with a scrappy goal early in the third period. The puck broke in front of the goal to the unmarked Ross Green, who shot low past Day to put Lightning ahead. A lead they would hold onto, despite Tigers throwing everything at the Lightning goal for the rest of the game. Tigers can feel unlucky to get nothing from the game and could not be faulted for their efforts.

After the game Head Coach Tom Watkins, commented, “The boys really dug deep tonight and unfortunately came up short in a very entertaining game of hockey, both teams played really hard in front of a lot of new fans in Telford Ice Rink and a good crowd overall. A great advert for hockey at this level.

We knew that Milton Keynes carry a very talented group offensively and we tried to slow them down on the transition. I thought we did that very well and limited quality opportunities off the rush. Special teams although very positive for us tonight, however, we did give up a short-handed goal which was a blow and ultimately cost us the points.

If we continue to play the way we are then good things will happen for this group. We have a lot of heart and play hard every night.”