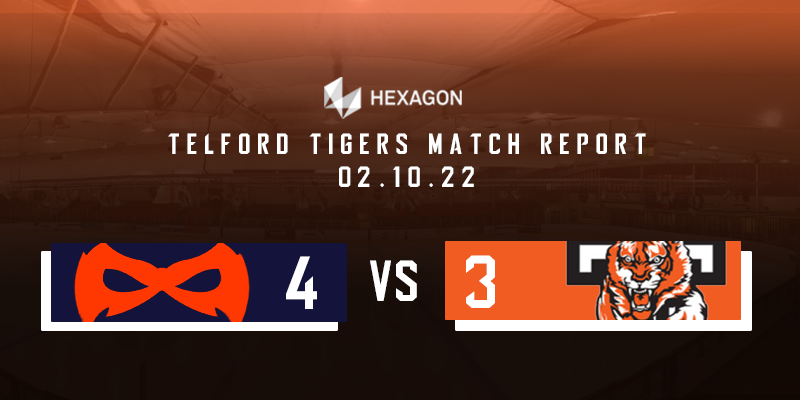 Tigers Pointless Weekend. Hexagon Telford Tigers made their second road trip of the weekend as they travelled to Peterborough to take on the Phantoms. Tigers had fallen to a narrow defeat against Basingstoke the previous evening and were looking to get back on track. The Shropshire team were still without Jonathan Weaver, Deakan Fielder and Nick Oliver.

The opening period was scrappy and neither team were at their best. A chance in the opening seconds for Duncan Speirs was well saved by Brad Day in the Tigers’ goal.  Five minutes into the game, the hosts take the lead.  A turnover at centre ice led to the puck falling to Glenn Billing at the blue line. The Peterborough forward hit a slap shot that beat Day, who was screened.

Tigers struggled to get any meaningful offence going but hit back with a power play goal. Jasper Foster was called for hooking, allowing Telford a man advantage. Ricky Plant picked out the unmarked Jason Silverthorn in the slot. The Tigers’ captain back handed the puck over Jordan Marr’s pads and into the net to draw the sides level.

Peterborough hit back within a minute of Tigers’ equaliser. Billing’s long range shot was tipped by Ales Padelek who was stood in front of the Tigers’ goal. The puck deflected out of Day’s grasp and went past him into the goal.

Tigers were much better in the second period and should have scored in the opening minute after great work by Scott McKenzie gave Bayley Harewood a glorious chance but Harewood’s shot from close range somehow missed the goal. Tigers then felt aggrieved when they had a goal ruled out. Marr made a terrific save from McKenzie and in making the save knocked the goal off its moorings. McKenzie had shot the rebound into the open net but the officials ruled that the “goal” would not count.

Telford finally got a deserved equaliser in the final five minutes of the period. Former Tigers’ player Austin Mitchell-King was awarded an interference penalty giving Telford a much needed power play. Once again Tigers scored with the man advantage and Silverthorn was given far too much space by the Peterborough defence. Danny Rose passed across the slot to Silverthorn who hammered a low shot past Marr to put Tigers level.

Telford took their first lead of the night at the start of the third period with a brilliant solo effort from  Harewood. The Tigers’ forward used his speed to beat the Peterborough defence, skate in on goal, dummied Marr and then slid the puck past him into the open goal.

Peterborough fought back and were gifted back to back power plays. Harewood was called for high sticking allowing Peterborough back in the contest.  Speirs equalised with a slap shot that gave Day no chance. Then, Ricky Plant was given a penalty for tripping. On the subsequent power play Tom Norton scored for Peterborough with a fierce shot from the Tigers’ blue line.

Tigers had a great chance to get back into the game with an extended 5-on-3 power play but some resolute Peterborough defending prevented Tigers from any real chances.

The final minute saw Day pulled from the goal to add an extra attacker but Marr in the Peterborough goal stood tall and Tigers fell to back to back defeats.

After the game Head Coach Tom Watkins commented, “It was another battling performance from the team. They all played with a lot of character. We had a slow first period after a lot of travel and a tough road game last night but we found our legs and we played a very strong second period, taking a lot of momentum into the third period. We had a good chance in the third period with a two man advantage to tie the game but couldn’t find the back of the net.  It has been a great effort from all the players, particularly our defensive core who have played with only four defensemen the last two weekends and have given us a solid back end.”