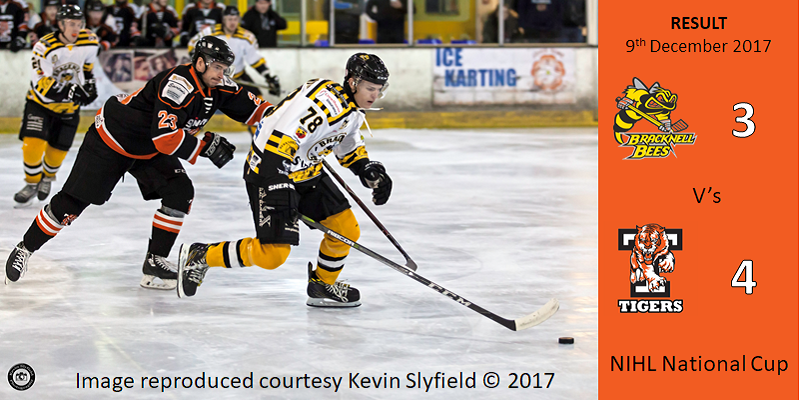 Telford Tigers 1 travelled to Bracknell on Saturday night for the first of back to back games against the Bees in the NIHL National Cup Group D.  Tigers went into the weekend knowing that a win in both games would see them progress to the quarter finals.

The game was delayed by almost an hour from the original face off time due to the late arrival of the officials and the poor ice conditions. It took three attempts at resurfacing before the ice was deemed playable.

Initially Tigers didn’t let the delay affect their performance and scored the opening goal in the 2nd minute. Brodie Jesson was sent clear on a break away and although his shot was saved by Mettam in the Bees goal, he managed to retrieve the puck and find Scott McKenzie in front of goal, who made no mistake with the finish. Shortly after Ricky Plant hit the post.  The poor ice surface almost cost Tigers in the 5th minute when net minder Dennis Bell came out to play the puck only to see it take a crazy bounce off the boards and almost end up in the Tigers’ net.  The ice continued to cause problems when in the 6th minute, Bracknell scored to level the game. Tigers were attacking and got caught out when an attempted shot got caught up in the ice, allowing Frankie Bakrlik a breakaway. Bell managed to save the initial shot but the rebound fell to Bakrlik for him to score.

Tigers responded in the 15th minute with a goal to retake the lead. McKenzie scoring his 2nd of the night from Joe Miller’s pass to leave the Tigers 2-1 ahead at the end of the 1st period.

Tigers started the 2nd period with a 5 on 3 power play but could not add to their score. Both teams had chances but it was Captain Jason Silverthorn who increased the Tigers lead in the 33rd minute with a controversial goal.  Bracknell player Bakrlik was down injured behind the Tigers goal but the referee waved play on and Tigers took full advantage with a break away that saw Silverthorn collecting his own rebound to score Tigers’ 3rd goal. Bracknell took exception to this with Josh Martin and Silverthorn dropping the gloves straight after the goal was given. Tigers got their 4th goal in the 36th minute, McKenzie tapping home from close range to complete his hat trick. Just as Tigers appeared to be running away with the game, Bracknell’s Alex Barker broke away and scored with a low shot passed Bell to cut the lead and leave the Tigers ahead at the end of the period 4-2.

In the 44th minute Bracknell reduced Tigers lead further, when Bakrlik scored his 2nd of the night with a powerful slap shot that went through Bell into the net to leave the score 4-3.  With Bracknell pushing for the equaliser, Tigers had several chances on the break to finish the game off but couldn’t beat Mettam.  Despite late pressure from the Bees, Tigers saw the remainder of the game out and hung on to take the 2 points and leave them 1 win away from the quarter finals.

Man of the match – Scott McKenzie

After the game coach Tom Watkins said, “We got the points tonight, which is huge for qualification for the next stage. We took a decent lead but then made a couple of errors to allow them to make it a one goal game, but I think at that point we were far more disciplined in our defensive play away from the puck. That was a big win for us on the road tonight.”