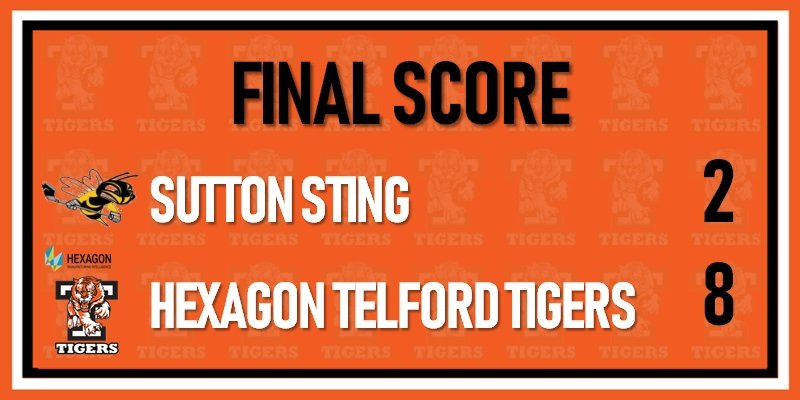 Tigers Swarm Sutton, Hexagon Telford Tigers 1 travelled to Ice Sheffield on Saturday night to take on Sutton Sting in an NIHL Moralee Division game.  The last time the two teams met resulted in an 11-1 victory for Tigers and due to recent cup commitments, Tigers had slipped down the league table to 4th place. Tigers started the game without Jason Silverthorn, Warren Tait, Denis Bell and Joe Hazeldine.

Tigers opened the scoring in the 1st minute with their first attack of the game. Doug Clarkson finishing off a passing move between Andy McKinney and Adam Taylor.  Tigers dominated the period but did not score again until the 10th minute. Tigers managed to score three goals in a minute! Scott McKenzie scored two goals in just 15 seconds and Jonathan Weaver added a fourth goal 30 seconds after McKenzie’s double. As the period reach a conclusion Doug Clarkson scored his second goal and Tigers’ fifth to end the period in total control.

Tigers continued their domination on the ice but this wasn’t reflected on the score sheet as Sutton’s James Goodman pulled a goal back in the 25th minute. Tigers responded with two goals as the period was ending. Brodie Jesson scored with a wrist shot from Corey Goodison’s pass and Adam Taylor used his speed to break away from the Sutton defence and shoot into the roof of the net for Tigers’ seventh goal.

Sutton scored a further consolation goal in the 52nd minute, Ryan Johnson catching out Tigers’ net minder Tom Hovell with a low shot to reduce the deficit to 7-2.  But, Tigers had the last say on the score sheet with 5 minutes remaining. Danny Rose hit an unstoppable slap shot from the blue line to round off the scoring and give Tigers a deserved 8-2 victory.

Tigers remain in 4th place in the league but have two games in hand on leaders Sheffield Steeldogs.

After the game coach Tom Watkins said, “ We started the game very fast and put it out of their reach at the end of the first period. We moved the puck well and played smart. I thought Dan Mitchell played a very strong game, with his speed and desire to make contact he created a lot of turnovers on the forecheck. He led the teams in hits tonight for sure.

We continued to create a lot of chances but it was slightly frustrating that we only went onto win the second and third periods 2-1.”