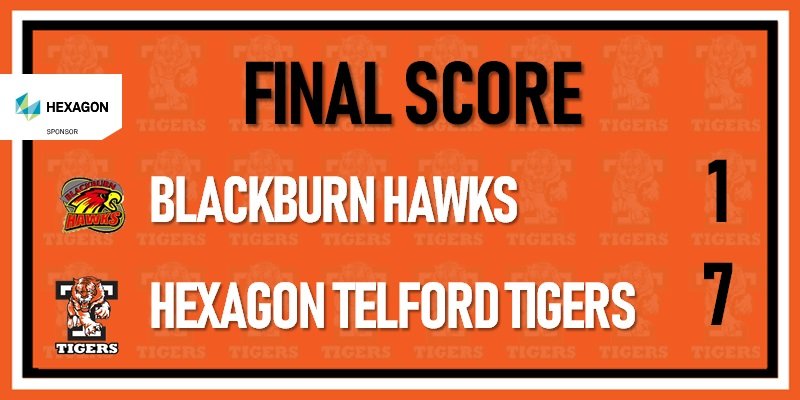 Tigers Swoop To Maintain Top Spot.  Hexagon Telford Tigers 1 travelled to Blackburn on Saturday night to take on the Hawks in an NIHL Moralee Division game. Tigers went into the game holding top spot in the table after being awarded two points by the EHIA earlier in the week. Tigers were given a 5-0 win over Whitley Warriors after the original game was cancelled due to the Whitley coach breaking down on route to Telford. Tigers had offered Whitley two alternative weekend dates to stage the game which were turned down by Whitley. Therefore, under the rules of competition, the game was awarded to Telford.

Tigers lined up without Andy McKinney and Dan Mitchell and added Ross Miller as net minder. Miller was on loan to Tigers for the game from Bristol Pitbulls due to the lack of available net minders for Tigers. Harrison Walker started in goal for Blackburn.

Tigers made the perfect start to a disjointed period when Scott McKenzie opened the scoring in the first minute, firing home a wrist shot into the net from an Adam Taylor pass. The goal would prove to be the only one scored in the first period as Tigers had plenty of possession but could not get past Walker.

The second period saw Tigers improve their passing and add to their lead just fifty four seconds into the period with Joe Aston scoring. Five minutes later, Blackburn scored a goal from Robin Kovar to halve the deficit. Tigers answered back with two goals in quick succession. First, Jason Silverthorn netted from close range, followed by Taylor scoring with a deft finish from Ricky Plant’s set up to give Tigers a 4-1 lead to end the period.

The third period saw Tigers see out the game with three further goals. Howells scored his second senior goal for the fifth, followed by goals from Plant and Silverthorn’s second of the game. Tigers’ win leaves them a point clear of rivals Sheffield and Hull with three games remaining.

After the game coach Tom Watkins commented, “That’s big a two points tonight for the boys. It was a potential banana skin for us against a dangerous team on home ice.  We made a great start to each period which meant we were able to play with the lead all night. Our stand in goalie Ross Miller played a great game, stepping up into what was a very important game for us. He settled in very well and didn’t look like conceding after some good saves. I would like to thank the Bristol Pitbulls for making him available to us. I am very pleased with our performance going into tomorrow’s game against Sheffield.”