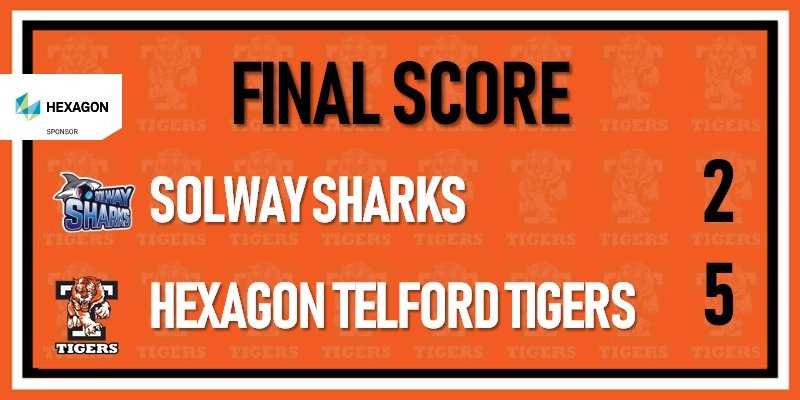 Tigers Take Semi Final Advantage, Hexagon Telford Tigers 1 took a long road trip up to Dumfries to take on Solway Sharks in the NIHL North Cup Semi Final first leg, on Saturday night. Tigers travelled north with a perfect record against the team from Scotland this season despite how close the games between the two teams have been. The last time the teams had met, Tigers’ won 6-5 in an end to end game.

Tigers were without Corey Goodison and Joe Hazeldine but were able to ice captain Jason Silverthorn who returned after missing Tigers’ previous game. Tom Hovell started in goal for Telford with Jordan McLoughlin in goal for Solway.

Tigers gave Solway an early opportunity when Ricky Plant was called for interference in the 4th minute. Solway took full advantage of the extra man when Struan Tonner found the unmarked Peter Gappa who opened the scoring. Shortly after, Solway’s Connor Henderson caught Tiger’s Adam Taylor with a high stick, causing a cut to Taylor’s face and resulting in Henderson being given a five minute penalty and being ejected from the game. Tigers levelled the game whilst on the subsequent power play.  Jonathan Weaver scoring with long range shot. A close period ended with the sides tied at 1-1.

The 2nd period continued in the same vein with both teams evenly matched. Clarkson had the best chance for Tigers when he was sent through on goal but McLoughlin made a good save to deny him. Tigers were then given another power play when Solway’s Ross Hancock was given an interference penalty. Tigers needed only four seconds of the extra man advantage with Scott McKenzie scoring a terrific goal from close range with a wrist shot into the roof of the net. Tigers held onto the lead until the end of the period.

Just nineteen seconds into the 3rd period, Silverthorn scored to give Tigers a 3-1 lead but Solway responded with their 2nd goal just eight seconds after Tigers had scored – Ian Bowie netting to reduce Tigers’ lead to 3-2.  Tigers did not sit back on their lead and increased it in the 45th minute. Clarkson hammered home his ninth goal of the competition to give Tigers a 4-2 advantage. With 10 minutes of the game remaining, Tigers scored the final goal of the contest, Adam Taylor scoring after being set up by Clarkson. Tigers take a three goal advantage into the 2nd leg of the tie at Telford Ice Rink on Sunday night.

After the game coach Tom Watkins said, “It was a great result on the road which gives us a decent advantage heading home tomorrow.  I want to make a special mention for our travelling support tonight, they were fantastic, very loud and created a good atmosphere. I hope we have more of the same tomorrow!”

Watkins added, “I thought we played some decent hockey and enjoyed a lot of possession in their zone but with Solway’s speed you have to manage the puck well as they counter attack very quickly.  There is a long way to go in this tie yet.”