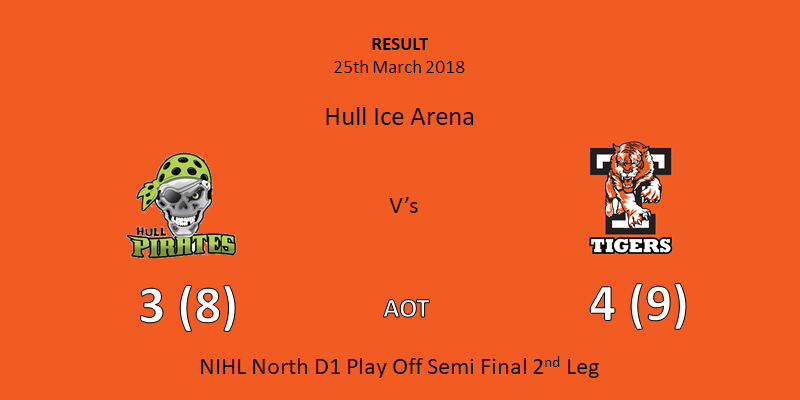 Telford Tigers 1 secured a dramatic 4-3 overtime win against Hull Pirates in Hull on Sunday evening to secure their place with an 9-8 aggregate score line in both the NIHL Moralee Conference North Playoff final and the NIHL Playoff final four weekend in Coventry.

In the NIHL Moralee Conference North Playoff Final, Tigers 1 will face conference winner Sheffield Steeldogs in a two leg final.  Playing in Telford on Saturday 31st March at 17:30 and then away at Sheffield on Sunday 1st April again with a 17:30 face off.

Telford Tigers 1 travelled to Hull Arena on Sunday night to take on the Hull Pirates in the 2nd leg of the NIHL North Playoffs semi final. Tigers had staged a hard fought comeback in the 1st leg having gone 3-0 down in the first 10 minutes of the game and were trailing 5-3 with 5 minutes left to play, but they rallied to leave the aggregate score 5-5 with late goals from Jonathan Weaver and Adam Taylor leaving the tie perfectly balanced.

Tigers were able to add U18 players Brodie Jesson, Jed Moreland, Louis Morgan and Dan Mitchell to the line up but were without Dale White and Nick Oliver.

Tigers responded with Jack Watkins and Adam Taylor going close. In the 12th minute Tigers drew level, Danny Rose’s shot through a crowd of players beating net minder Ashley Smith to give Tigers a deserved equaliser.  The vociferous following from Shropshire were dismayed by a number of non calls by Referee Hewitt, Bell appeared to be knocked over by Hull’s James Archer and Adam Jones was cross checked off the puck without a penalty being called. Tigers ended the period on the power play when Archer was finally sent to the penalty box for interference, but they could not add to the score leaving the game level at 1-1.

The 2nd period saw end to end action and penalties called for both teams with Macaulay Halford (2), Adam Jones, and Tom Watkins getting called for Telford. Bobby Chamberlain, Jason Hewitt, Tom Stubley and Lee Haywood were called for Hull, as the game threatened to spiral out of control. Bell made two terrific saves at one end and Tom Watkins and Silverthorn went close at the other end. The period ended with no further goals being scored, leaving the game finally balanced going into the 3rd period.

Hull took the lead 3 minutes into the 3rd period with a hugely controversial goal. Lee Bonner broke away on the Tigers’ goal and his shot was saved by Bell but Bonner’s momentum carried him into Bell, pushing the net minder into the net along with the puck and knocking off Bell’s helmet. After considerable delay, Referee Hewitt consulted both his linesman and the goal judge then gave the goal, much to Tigers’ disgust.  Tigers responded with their second goal 3 minutes later when Warren Tait tapped home after a goalmouth scramble.  Tigers pressured the Hull net but Smith made a glove save from Jack Watkins’ fierce slap shot.  Hull took the lead for a third time in the 53rd minute, scoring what appeared to be a killer blow, when Davies swept the puck in from close range. Tigers would not accept defeat and equalised with 5 minutes to play when Jonathan Weaver tipped Ricky Plant’s shot into the top right hand corner of the net. With just 3 minutes left to play, Jack Watkins took a tripping penalty. Hull had constant pressure on the Tigers’ goal during the power play, with Bell making an astounding glove save from point blank range to keep Hull out. The game ended 3-3 sending the contest to sudden death, 3 on 3 overtime.

Tigers would take the victory and a place in the NIHL North final when overtime was only 59 seconds old, Scott McKenzie found Weaver in space and, after beating a Hull defender, he faked a shot sending Smith the wrong way and fired home to send the Tigers’ fans wild and his team into the final.

After the game coach Tom Watkins said, “What a series and what a turn around. We certainly used our get of jail card this weekend. Credit to the boys, we were behind all weekend up until the game winner went in, after giving ourselves a mountain to climb.

Tonight we kept our focus and battled through some tough breaks but stayed composed and with resilience and perseverance got the job done.”

Watkins added, “What a great feeling, I was so pleased for the guys and must salute our travelling support tonight. They were first class and we really appreciated them hanging around to meet us in the bar. We are looking forward to the next two weeks.”