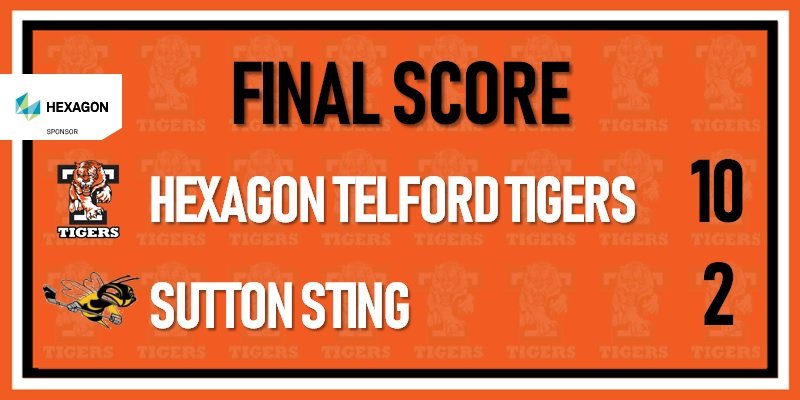 Clarkson’s Five Goal Haul, Stings Sutton.  Hexagon Telford Tigers 1 faced off against Sutton Sting on Saturday night at Telford Ice Rink. Sutton had been promoted to the NIHL Moralee Division last season and had performed admirably in the league so far. Sting came into the game in seventh place having won seven games so far this season. Tigers had won both previous games between the two teams and were looking to maintain second place in the league with leaders Sheffield expected to beat opponents Blackburn Hawks in their home game on Saturday night.

Tigers iced without Scott McKenzie, Joe Hazeldine and Dan Mitchell. In goal for Tigers was Tom Hovell with Warren Gilfoyle starting in the net for Sutton.

Tigers almost made the worst possible start to the game in the first fifteen seconds as a mistake by Jonathan Weaver allowed Sutton’s Stanislav Lascek a great chance. Lascek went clean through but shot wide of the goal. Tigers were then handed a chance to open the scoring with an early power play when Lascek was awarded a high sticking penalty. Tigers made Sutton pay with Warren Tait passing from behind the goal to Doug Clarkson who scored from close range. Tigers added a second and third goal in quick succession shortly after. Firstly, Ricky Plant set up Jason Silverthorn to score with a shot that went through Gilfoyle and then Adam Taylor scored with a shot from a tight angle that Gilfoyle will be disappointed to concede from. Sutton were given a power play chance in the twelfth minute when Andy McKinney was called for hooking. Sutton made the extra man pay with a good passing move that allowed Joesph Colton to tap in at the far post to cut Tigers’ lead to 3-1.  McKinney was then sent back to the penalty box for what appeared to be a very harsh decision by referee Miller. McKinney skated in on Gilfoyle in the Sutton goal and appeared to be tripped by a Sutton defender causing him to fall to the ice and slide into Gilfoyle, knocking him over. McKinney was penalised for interference putting Sutton on the power play. Tigers were a man down but managed to score their fourth goal whilst short handed. Clarkson sent Adam Taylor in on a breakaway, Taylor scored with a neat finish through the legs of Gilfoyle.  Tigers scored the final goal of the period in the seventeenth minute, Jonathan Weaver applying the finish to a passing move between Silverthorn and Plant to send Tigers into the break 5-1 ahead.

Tigers opened the second period in similar fashion to the first period. Clarkson scored his second goal of the game with a shot from behind the Sutton net that was banked in off Gilfoyle and into the goal.  Sutton then pulled a goal back that had an element of fortune about how it was created. A clearance from Sutton’s defensive zone hit referee Miller’s skate and deflected into the path of Sutton’s Scott Morris, wrong footing the Tigers’ defence. Morris passed to Ryan Johnson who found the unmarked Dominic Martin at the far post to score Sutton’s second goal.

Tigers responded with a seventh goal and a hat trick goal for Clarkson with the big Canadian import forward showing excellent stick handling skills to slide the puck between the net minder’s legs into the net. After the seventh goal, Sutton changed their net minder with Nicholas Winters replacing Gilfoyle in goal.  Winters could do nothing about Tigers’ eighth goal, Weaver scored with a wrap around goal, to give Tigers an 8-2 lead at the end of the second period.

Tigers added two further goals in the third period both coming from Clarkson, taking his total to forty nine for the season. Clarkson’s fourth of the game was scored whilst on the power play and was set up by Tait, with Clarkson applying the finish from close range. Tigers’ tenth goal (and Clarkson’s fifth) was scored in the 51st minute, with another neat stick handling move to create an opportunity and apply the finish between the legs of Winters.

Tigers remain in 2nd place in the league a point behind leaders Sheffield with a game in hand.

After the game coach Tom Watkins said, “It was a good performance from the guys, we were clinical in front of goal and moved the puck well. We came through the game without any injuries which is important, we were able to focus on certain areas, plus we were able to get everyone in the game all night. I’d like to see us make improvements on the penalty kill as we’re giving up goals and that must improve. “

Hexagon Telford Tigers 1 return to play at Telford Ice Rink Sunday 20th January 2019 at 18:00 in the NIHL Moralee Conference against Solway Sharks. Hexagon Telford Tigers 2 are next in home action at Telford Ice Rink on Sunday 13th January 2019 at 18:00 in the NIHL Laidler Conference against Hull Jets. For details of all future fixtures, check out the Tigers fixture list and www.telfordtigers.net/tickets for ticket information.