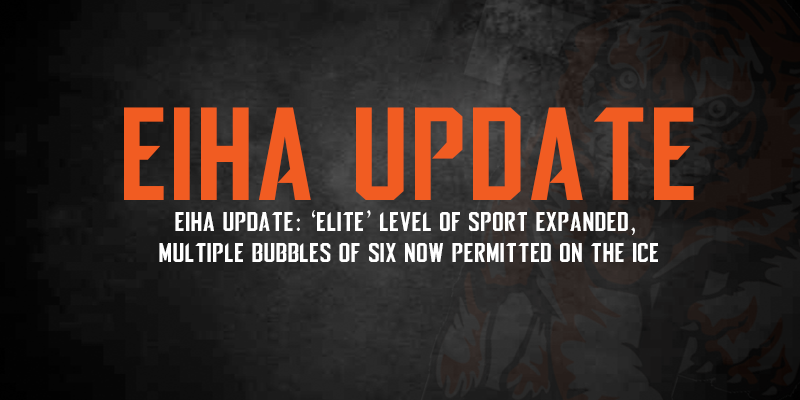 The Government has issued new Covid-19 guidance for indoor sport in England and the EIHA have been working with Department for Digitial, Culture, Media & Sport (DCMS) to ensure that our Return To Play guidance is in line with the new restrictions place on participants over the age of 18 whereby they must follow the ‘rule of six’ social distancing restrictions.

The EIHA and IHUK, alongside other indoor sport governing bodies such as basketball, netball and football, have been waiting on further guidance to confirm with grassroots clubs following updates released by Sport England yesterday.

The EIHA are pleased to confirm that we have been given the green light to expand the ‘elite level’ of ice hockey in England to include NIHL National Division, NIHL Division 1, WNIHL Elite and WNIHL Premier.  These groups will not be limited to the ‘rule of six’ when training.

Outside of the elite level for adults, training must only take place in groups of up to six people.  However DCMS have now confirmed that multiple groups of six can participate at the same location, provided groups do not mix and further information has been provided to support this by Sport and Recreation Alliance.

There are still points of clarity that the association are seeking, and further updates will be provided as and when they are received.  Venues, clubs and other bodies cannot confirm the application of the return to play plans from governing bodies or DCMS based on an interpretation of the guidance and the EIHA continues to work with the Ice Rink Managers Association (IRMA) and the EIHA Leadership Team to address questions directly with DCMS raised by our sport.

What indoor ice hockey activity currently can take place? as of 6pm on September 24

What does this mean for EIHA competitions?

The EIHA and Ice Hockey UK are engaged in discussions with DCMS around the safe return of spectators to venues supported by previously issued guidance to relevant clubs so when the time is right, we can return to the sport we love together.  This work also includes working with DCMS to understand the risks, level of financial or other support that is needed for our sport and are supporting the sector in promoting the role we play in our communities.

Full guidance and support in relation to Coronavirus (Covid-19) can be found online at gov.uk/coronavirus. The Club will continue to provide updates upon receiving them through our website and social media channels.