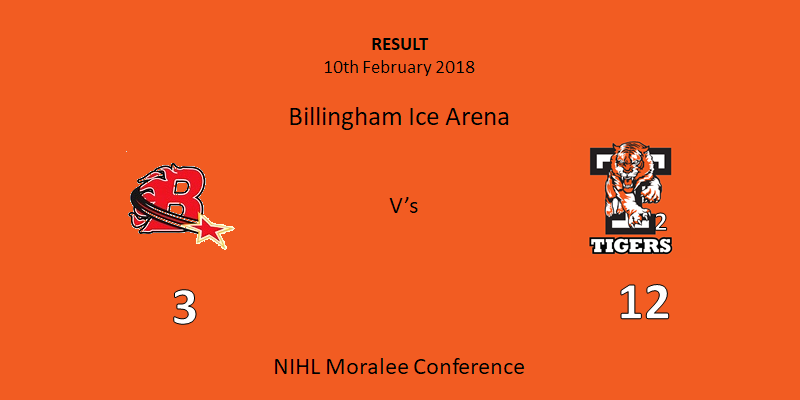 Telford Tigers 1 took a long road trip to Billingham to take on the Stars in the NIHL Moralee Conference game on Saturday night. Tigers had taken top spot in the league on Wednesday with a 14-1 win over Deeside and were looking to maintain their advantage as league leaders. Tigers were without Jack Watkins, Macauley Halford and Jonah Armstrong.

Tigers started slowly but took the lead in the 14th minute through Dale White. Two minutes later, Scott McKenzie added a second goal to give Tigers the advantage at the end of the first period.

In the second period, Tigers took the game away from Billingham with 6 goals. Jason Silverthorn and McKenzie both tallied on the power play followed by goals from Dan Mitchell and Warren Tait to increase the lead to 6-0. Deniss Baskatovs then got on the score sheet for Billingham but Tigers responded with further goals from Silverthorn and Danny Rose giving Tigers a comfortable 8-1 lead at the end of the second period.

Tigers continued their dominance in the third period with both Rose and White getting their second goals of the night.  Andy Finn pulled a goal back for the Stars to cut the lead to 10-2. Tigers coach Tom Watkins then took advantage of the lead and gave back up net minder Ryan Lewis (from the U18s) the last 5 minutes of the game. Rose completed his first ever senior hat trick in the 57th minute to increase the lead to 11-2 before Artur Ozols scored a further consolation goal for Billingham.  Tigers had the last say on the score sheet, Dale White scoring a tap in from Silverthorn’s pass to complete his first hat trick for Tigers and close out a comfortable victory which saw Tigers remain top of the league.

After the game Coach Tom Watkins said, “It was a great performance on the road, it was also nice to be able to give Ryan Lewis a few minutes in goal and also to see Dale score his first hat trick for the club.” Watkins added, “It was a great play from Jason Silverthorn on Dale’s third goal. Jason made a really unselfish play to Dale when he was also on a hat trick.  Jason showed great leadership and how important he is to this hockey club.”