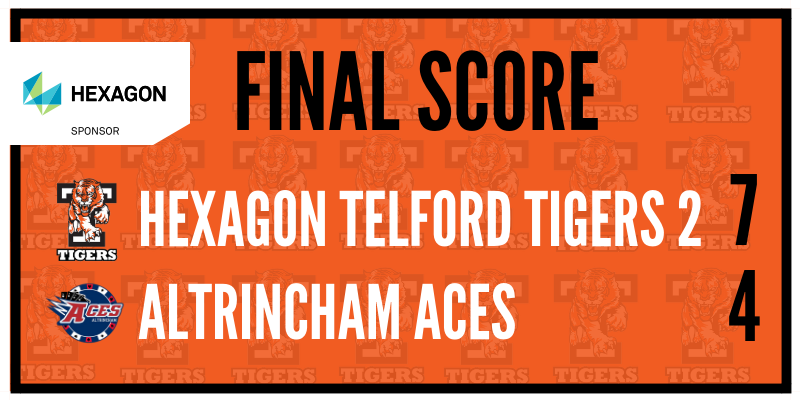 Hexagon Telford Tigers 2 Ace it again!. Saturday 12th January saw the Telford Tigers 2 team and a number of fans travel to Altrincham to take on the Aces. With no national anthem the Tigers were straight into the play showing the Aces a good strong performance. Even though the Tigers were missing Matt Price, Josh Hustwick, James Smith, Connor Gordon, Charlie Hammerton, Lubomir Plandor and Karol Jets; three lines were iced and all of the players stepped up. The first goal of the night was scored 11 minutes into the period after #2 Rhys Howells found the back of the net, assisted by #23 James Callagher and #8 Simon Harrison. The Tigers settled down after frantic couple of minutes before the first goal, and new signing #53 Filip Supa added strength to the power play scoring two minutes later assisted by #36 Henry Adams.

The second period was dominated by power play and penalty kills. The Aces only manged to gain the advantage once with a power play goal. The Tigers dominated the second period with good passing, #59 Jordan Jolly and #40 Ben Washburn we able to get the puck to #53 Filip Supa who scored his second goal of the night. Strength in the power play resulted in #75 Liam Preece scoring his first goal of the night, assisted by #27 Callum Griffin and #53 Filip Supa, followed 21 seconds later by #27 Callum Griffin finding the back of the net assisted by #53 Fillip Supa and #72 Callum Bowley.

The Aces looked as if they had scored a delayed penalty goal in the early minutes of the third period, but Mr Susters washed out a goal and the play moved back to the middle of the ice where #51 Liam Bartholomew was then called for a minor 2 minute penalty for hooking. The third period also gave the Tigers a 5 minute power powerplay opportunity, at this point in the game the Aces no where near looking for a comeback… The Tigers were then able to recycle the puck around the goal again allowing #72 Callum Bowley to capitalise another scoring opportunity from solid passes between #53 Filip Supa and #75 Liam Preece.

A good strong performance from all of the team in Altrincham, the lads looked in high spirits looking forward to Sunday’s game against Hull at Home.

Coach Callum Bowley had this to say about his team’s performance:

“I was extremely pleased with the performance from everybody in Altrincham, as it’s not an easy place to go and come back with two points. We had a slow start and conceded a goal early on in the game, but I liked the way we stuck with it and shown character to come back. We said before the game we want to win every period, stick to the plan and battle hard for one another, and we did just that.”