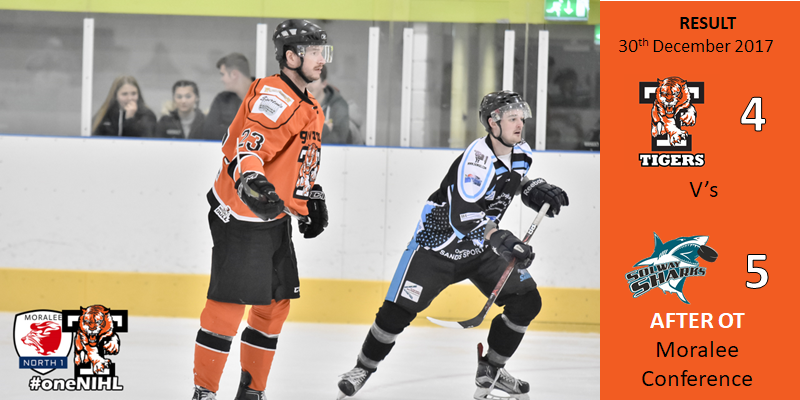 Telford Tigers 1 took on Solway Sharks in an NIHL Moralee Division game at Telford Ice Rink on Saturday night. Tigers went into the game in 3rd place in the league, 3 points behind leaders Sheffield Steeldogs but with a game in hand. The game was the final match ever for Tigers’ Joe Miller who had announced that he was retiring from the sport at the end of the game.

Solway struck 1st with the opening goal of the contest in the 8th minute when Daniel Abercombie finished off some neat passing to score.  Tigers responded in the 11th minute when Captain Jason Silverthorn fought off a check to fire home into the top right hand corner. The goal the crowd had been waiting was scored in the 17th minute, Miller was sent clear by a precise pass from Scott McKenzie and he made no mistake with a cool finish to score his final goal in British Ice Hockey and give the Tigers a 2-1 lead at the end of the 1st period.

In the 28th minute Silverthorn added his 2nd goal of the night, whilst Tigers were on the power play, increasing the lead to 3-1. Solway responded with 2 quick goals from Duncan Speirs and Connor Henderson to draw the sides level.  But, Tigers ended the 2nd period ahead when Adam Jones’ shot from the blue line flew straight into the net to give Tigers a 4-3 lead going into the third period.

Solway equalised in the 48th minute when Marek Charvat scored a wrap around goal to set up a frantic final 5 minutes of the game, with both teams going close to getting the deciding goal. Tigers going closest when Miller hit the bar with a powerful wrist shot.

With the teams level at 4-4 at the end of the 3rd period, the game went into a 5 minute sudden death overtime period with the 1st team to score winning. Solway would get the deciding goal in the 3rd minute of overtime, through Charvat, who broke away from the Tigers’ defence to fire home passed net minder Dennis Bell’s despairing dive.

Man of the match – Joe Miller

After the game coach Tom Watkins said, “That’s not how we wanted to end the year and certainly not the result we wanted for Joe in his last game. We got ourselves in a good position at 3-1 but Solway were always threatening and when we made some mistakes they capitalised. I was disappointed with our reaction and felt Solway raised their game at that point. There are areas we didn’t do ourselves any favours this evening but credit to Solway they were hungrier than us.”