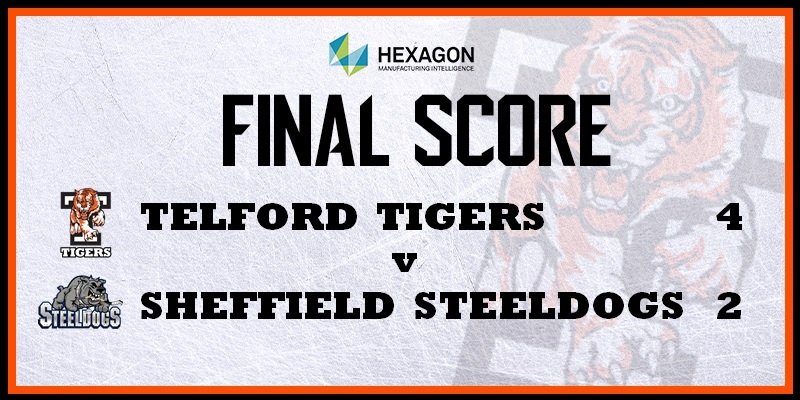 McKenzie is Tigers’ Shootout Hero. The Hexagon Telford Tigers to Peterborough on Sunday night to play the Phantoms in National Division game.  Tigers came into the game off the back of a 4-2 win at home against Sheffield Steeldogs on Saturday night, a result that continued a run of 7 successive wins for the Shropshire team.

Tigers started the game with Brad Day in goal, Peterborough started with Jordan Marr in goal.

Tigers began the game brightly and had an early chance with Brandon Whistle forcing a pad save from Marr. Adam Taylor then went close after using his speed to beat the Peterborough defence and getting a shot away, but the shot was too high and went over the goal.  In the 5th minute, Tigers took the lead. Peterborough’s Will Weldon was called for hooking, giving Tigers a power play. Jonathan Weaver controlled the puck from the face off and found Andy McKinney unmarked in on goal, McKinney backhanded the puck between Marr’s legs to open the scoring.

Weldon then led a Peterborough 2 on 1 break away but shot wide of goal. Tigers were then caught out with too many men on the ice, gifting the Phantoms a power play. Peterborough drew level when Scott Robson deflected an Ales Padelek shot past Brad Day to make the score 1-1.

Tigers continued to create chances with Ricky Plant going close and Taylor again making space with his speed but he lacked the finish.

As the period entered the final seconds, Tigers were penned in their own defensive zone and paid the price for not clearing the puck when Glenn Billing hit a long range shot past the unsighted Day to give the Phantoms a 2-1 lead at the end of the 1st period.

The 2nd period was as equally close as the 1st. Tigers were handed a great chance in the 23rd minute when two Peterborough players were awarded penalties, giving Tigers 1 minute and 30 seconds of 5 on 3 power play. Despite the two man advantage, Tigers barely threatened the goal and Peterborough successfully killed off both penalties.

Brandon Whistle hit the post for Tigers followed by Martins Susters going close for the Phantoms with a wrap around shot that Day just managed to block and clear.

Tigers deservedly drew level in the 37th minute. Corey Goodison broke up a Phantoms attack and skated the puck into Peterborough zone and passed the puck to the onrushing Dominik Florian who expertly dispatched the puck past Marr low to his left to take the score to 2-2.  Before the end of the period, Tigers should have taken the lead when Joe Aston shot over the goal with Marr still down from saving Taylor’s slap shot.

The third period was by far the best of the game. Tigers took the lead just a minute in to the period whilst on the power play after Weldon was awarded a cross checking penalty. Goodison’s shot was saved by Marr but Fin Howells was first to pounce on the rebound and smashed it into the net. Tigers increased their lead in the 51st minute, again on the power play. Florian did well to keep the puck in at the blue line, then skated past the Peterborough defense and hammered the puck past Marr to give Tigers a 4-2 lead.

The game looked over at this point but Tigers discipline let them down badly, with a string of penalties to Jack Watkins, Thomas McKinnon and Jonathan Weaver which gave Peterborough chances to get back in the game. Sadly for Tigers, the Phantoms took full advantage of the extra player and levelled the game with goals from Padalek and Thomas Norton. Padalek’s goal came on a 5 on 3 power play where Peterborough pulled their net minder to give them 6 players to Tigers 3. The game ended 4-4 and went into sudden death overtime.

Tigers had the best chance of the overtime period, a well worked move left Goodison with a free shot at goal but the Tigers’ defender hit the puck straight at Marr and the game would go to penalty shots.

Susters went first for Peterborough and missed. Scott McKenzie went first for Tigers and scored, initially the referee ruled the goal out but consulted his fellow officials and gave the goal. Stepanek missed and was followed by Florian who missed. Padalek scored for Peterborough leaving Whistle the chance to win the game but he was beaten by a poke check from Marr.

The shoot out then went to sudden death. Susters hit the post for Peterborough, McKenzie appeared to score with his next shot with the puck hitting the cross bar and bouncing down over the line but the referee ruled it out. Padalek went next but Day saved his shot. Florian missed again for Tigers.

Stepanek took another shot but again missed. McKenzie stepped up for the 3rd time and beat Marr with a perfectly placed wrist shot to win the game and send Tigers back to the top of the league with their 8th straight victory.

After the game Head Coach, Tom Watkins commented, “I’m normally pretty calm and keep my emotions in check but tonight I’m drained emotionally. That was a tense third period, overtime and shootout! We worked extremely hard to get ahead after going behind 2-1 and got ourselves in a great position at 4-2 then took penalty after penalty with some dubious calls going against us. Peterborough are a well organised team and if you give them chances, they have the quality to punish you. Credit to Slava (Peterborough Coach) pulling the goalie to create a sense of urgency and it worked. With the game at 4-4 momentum was in the Phantoms’ favour and, as they were at home, we had to dig deep and we did.”

Watkins also stated, “Credit to all the boys, we have got a great team spirit, a good group and I’m pleased for the boys to get on an 8 game winning streak. From my perspective we’re winning and I still believe we can get better as a team. We’ve been missing some key guys and I don’t believe we’ve really hit our stride. I think we can get better. I really like the depth of this team which is good and we have managed to keep winning with 2-3 guys missing in pretty much every game.”

Hexagon Telford Tigers 1 will next be in action on home ice on Saturday, 2nd November against Leeds Chiefs for our Halloween special. Match Night tickets available to purchase here!