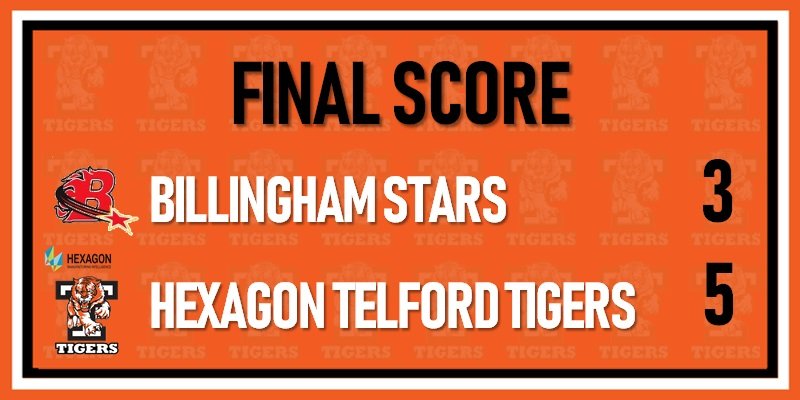 McKenzie Stars in Tigers Cup Victory. Hexagon Telford Tigers 1 travelled to Billingham on Sunday night to take on the Stars in an NIHL North Cup game. Tigers had won 9-4 the previous night against Murrayfield Racers and knew that a win in Billingham would take them to the top of the cup table.  Tigers were again without Denis Bell, Warren Tait and Jason Silverthorn but were able to add Ryan Lewis, Jed Moreland and Dan Mitchell to the line up.

The 1st period was an even, fast paced one with both teams taking a number of penalties. Tigers taking three and Billingham four. The crucial one was taken by Nick Oliver for slashing and, on the subsequent power play, Billingham opened the scoring. Darren Stattersfield giving the Stars the lead in the 18th minute – a lead they held until the end of the period.

Tigers started the 2nd period on the power play after James Moss had taken a slashing penalty at the end of the 1st period. Tigers took just 10 seconds of the period to level the game. Andy McKinney fired home from Jonathan Weaver’s pass.

Tigers took the lead in the 27th minute when Scott McKenzie broke into the Billingham zone and threaded a pass to Ricky Plant who found the net with a precise shot.   Billingham were then given another power play after Tigers’ Brodie Jesson was called for clipping. Billingham scored their 2nd power play goal of the game when Chris Sykes beat Tigers’ net minder Tom Hovell with a low shot.   Tigers ended the period a goal behind after another ill advised penalty. Hovell was called for delay of the game and Billingham took full advantage of the extra man with Sykes scoring his 2nd of the game to give Billingham a 3-2 lead.  Towards the end of the period Tigers thought they had equalised when the puck entered the net from a fierce shot by Doug Clarkson. But somehow none of the officials saw it, despite the puck hitting the back bar of the net and bouncing out.

Tigers didn’t let the injustice affect them and started the final period strongly and levelled the game just 3 minutes into the period. McKenzie finishing off a neat passing move between Weaver and Clarkson. Three minutes later, Tigers took the lead when Clarkson scored a goal that was awarded, finishing off McKenzie’s pass with a shot that gave Billingham net minder James Flavell no chance.

As the game entered its final stages, Billingham pulled Flavell for an extra attacker and went close to getting the goal they needed to level the game. However, it would be Tigers who would seal the victory with an empty net goal from McKenzie with 26 seconds of the game left.

Tigers’ win and their 4 point weekend puts them top of the North cup table after 7 games.

After the game we caught up with coach Tom Watkins for his comments, “I really enjoyed the game and of course I’m pleased to get the two points on the road. I think both teams played hard, battled and the commitment was there from both clubs, which created a good atmosphere and I’m sure people will agree it was an exciting game of hockey. I think both goalies were excellent and made some big saves.

We had to show some character to come from behind in the third and it will be interesting to see the goal that was not given on the video, as we were all sure it was a goal, as were several of the Billingham players. “

Hexagon Telford Tigers 1 return to play at Telford Ice Rink Sunday 11th November at 18:00 in the NIHL Moralee Conference against Billingham Stars. Hexagon Telford Tigers 2 are next in home action at Telford Ice Rink on Saturday 17th November at 19:00 in the NIHL Laidler Conference against Coventry Blaze NIHL.