Dragons snatch a win from Tigers 2… 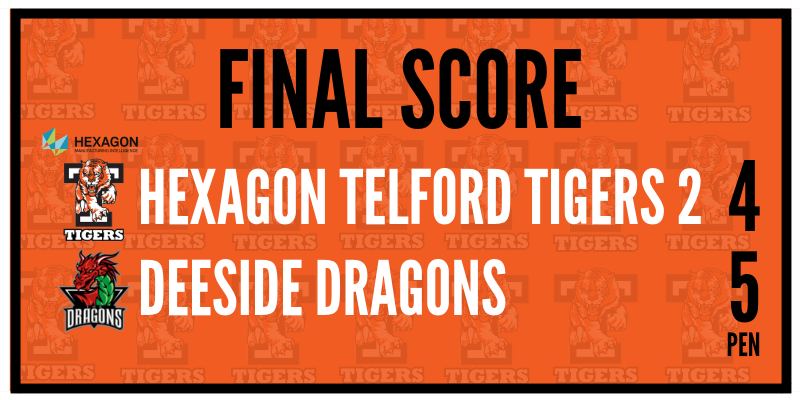 On Sunday 4th November Tigers 2 took on Deeside for the third time.
After an awful game in Deeside the Tigers were looking to bounce back and indeed they did.

#40 Ben Washburn scored 21 seconds into the first period, the fans were still cheering when #75 Liam Preece and a Deeside player got into a fight four seconds later. Some good game play and passing from the tigers couldn’t stop the Dragons from equalising. Scuffles at the face off saw #72 player coach Callum Bowley and Deesides James Parsons pick up 2 for cross checking and 2 plus 2 for fighting.

The start of the third period wasn’t good, the Tigers failed to take advantage of the 5 on 3 and sloppy lethargic play saw the Dragons bring the score to 4 all. The Lads put up a strong defence at the end of the period defending a 5 on 3, taking the game into overtime with the Tigers on the back foot.

Overtime saw neither team score, which lead the game to penalties.
Another game ended with missed penalty shots, a terrible way to lose but the Tigers walk away with a point.

‘We came out very strong against Deeside and were very much in full control of the game after the first period. The second period I thought we cruised and never really got out of first gear, and then the third period I thought we switched off, were complacent and were very sloppy with our decision making on the puck. Our powerplay has to improve as we struggled to convert our opportunities and we also took penalties late on in the game due to tiredness, which hurt us going into overtime. It’s a game we need to learn from because we have to see out games especially when we are up by a couple of goals going into the final period.’