Tigers 1 Race to Another Cup Win 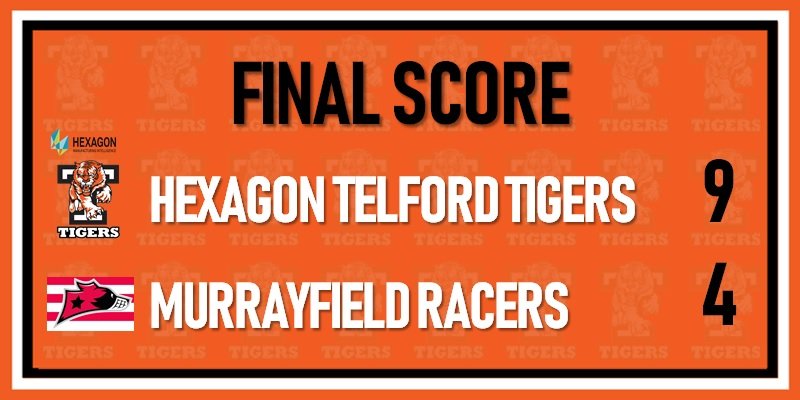 Tigers 1 Race to Another Cup Win. Hexagon Telford Tigers 1 faced off against Murrayfield Racers in the NIHL North Cup at Telford Ice Rink on Saturday night. Tigers had beaten Murrayfield 9-1 in Edinburgh last Sunday in the reverse fixture and were without a number of key players for the game, with Jason Silverthorn, Warren Tait and Denis Bell all out with injuries. Also missing were U18 players Jed Moreland, Henry Adams, Ryan Lewis and Dan Mitchell.  Tigers 1 called up Tigers 2 players Liam Preece and Zack Brown to the roster.

Tigers made a fast start to the game and were ahead in just the 2nd minute when Doug Clarkson’s pass from behind the goal found the unmarked Andy McKinney to shoot through the legs of Murrayfield net minder Craig Mallinson.  Tigers extended the lead 2 minutes later after Mallinson lost his stick and was caught out of position attempting to retrieve it, allowing Scott McKenzie to win possession of the puck and pass to Adam Taylor who found the net from close range.

Murrayfield responded with a goal from Aaron Robertson in the 9th minute to reduce the deficit.  Shortly after, Tigers hit back with a third goal whilst on the power play.  Doug Clarkson and Ricky Plant combined to allow Jack Watkins to tap in from close range at the second attempt.

Murrayfield then scored their second goal after Kyle Murray sent Martin Cingel clear on a break away to score with an excellent finish.

Tigers finished the period short handed after Jonathan Weaver and Jordan Stokes were given penalties, putting Murrayfield on a 5 on 3 power play but it would be Tigers who would score. Just as Tigers returned to 4 skaters, Danny Rose sent a pass to McKenzie who had time to pick out the bottom corner of the net giving Tigers a 4-2 lead at the end of the 1st period.

Tigers started the 2nd period in the same vein, Adam Taylor hitting the post early on so it was no surprise when Tigers added a fifth goal. Clarkson showed great skill to find an unmarked Jordan Stokes in the left circle. Stokes’ shot hitting Mallinson on the shoulder on the way into the net. Clarkson then tapped in McKenzie’s pass for the sixth goal. Murrayfield responded 30 seconds later, John Dolan scoring to make the score 6-3. Brodie Jesson than had a shot cleared off the line as Tigers ended the period in dominant fashion.

Murrayfield had the final say on the scoresheet with a goal in the last 30 seconds from Daniel Abercrombie to end the game with Tigers being the comfortable winners.

Man of the match: Liam Preece.

After the game coach Tom Watkins said, “I think we were probably expected to win and, with that, our mentality was poor. We tried to do too much and jump up because we had the time and space to do so. Murrayfield worked hard, played with commitment and got solid goaltending again. For two periods, it was close. If you think that in the first period it was 3-2 in our favour, we took two quick penalties, so are left killing a 5 on 3. In that situation, the game could be different if they score.

We tried to play the third period with our minds looking ahead to what will be a difficult game tomorrow on the road in Billingham, making sure we played with good habits.”

Hexagon Telford Tigers 1 return to play at Telford Ice Rink Sunday 11th November at 18:00 in the NIHL Moralee Conference against Billingham Stars. Hexagon Telford Tigers 2 are next in home action at Telford Ice Rink on Saturday 17th November at 19:00 in the NIHL Laidler Conference against Coventry Blaze NIHL.