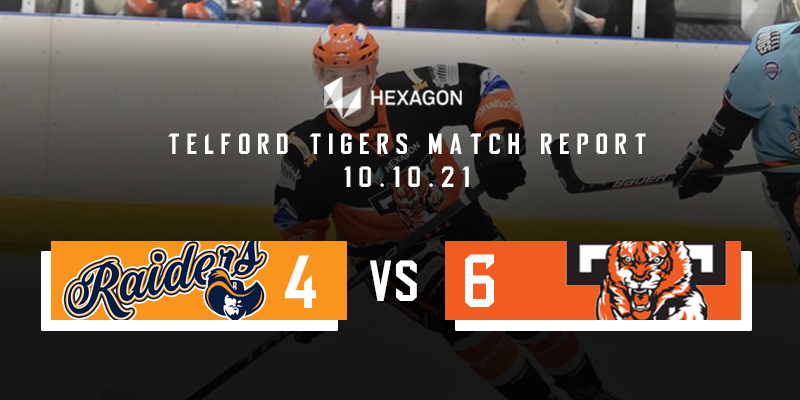 McKenzie Treble Secures Semi-Final Place. Hexagon Telford Tigers travelled to Romford to take on the Raiders in their crucial final group game of the Autumn Cup. Tigers started the game in the final qualification place knowing that a win would guarantee a semi-final place and a defeat would leave them needing other results to go in their favour.

Tigers were unable to ice Jonathan Weaver and Andy McKinney and made a disappointing start to the game, conceding in the third minute when the unmarked Aaron Connolly shot past Brad Day in the Tigers’ goal to give the home side the lead. Tigers hit back straight away with a goal to level the scores. Scott McKenzie won a face-off and sent the puck back towards the blue line where Nick Oliver smashed the puck goalwards beating Ethan James in the Raiders’ goal. Tigers were dominating the play in the period but couldn’t take the lead and were caught out in a controversial moment. A shot was saved by Day and the puck looped up into the air. Connolly was first to the rebound but clearly played the puck with his stick above the crossbar yet referee Brooks awarded the goal, despite the clear infraction. Tigers fell further behind 30 seconds from the end of the period with more poor defending which allowed Erik Piatak a free shot at goal to score Raiders’ third.

Tigers dominated the second period, scoring three times. A minute into the period Corey Goodison’s shot was saved by James but McKenzie was on hand to score from the rebound. McKenzie added his second and Tigers’ third shortly after. Austin Mitchell-King passing from behind the goal to McKenzie who scored from close range to draw the sides level. Tigers then took their first lead of the game. Joe Aston with a superb solo effort, beating two Raiders’ defenders and then skating past James, faking a shot and then sending the puck over the netminder into the goal.

An early third-period power play for Tigers proved successful and saw McKenzie complete his hat trick with a powerful shot from a distance that James had no chance with. With Tigers seemingly comfortable. Connolly drew Raiders within a goal of Tigers’ lead, setting up a nervous last few minutes. Oliver was then awarded a very harsh boarding penalty giving the Raiders a power play and a huge chance to draw level. However, it would be Tigers who would score whilst shorthanded, Mitchell-King breaking away and sending a wrist shot past James to give Tigers an unassailable lead. The victory gives the Tigers a place in the semi-final alongside Leeds Knights, Sheffield Steeldogs and Swindon Wildcats.

After the game, the Tigers’ Head Coach Tom Watkins commented, “That’s a big win tonight in a game where the pressure was on us as a team to qualify for the next stage and with two key players in Weaves and Andy missing. We started the game very well, outshooting Raiders 17 to 7 in the first period but ended 3-1 down, gifting some goals again with a combination of poor defending and a bad bounce. After that I couldn’t be prouder of the boys, we moved our feet really well and raised our game. We turned the game around in the second period with good puck management, forecheck, decision making and we continued to play solid two-way hockey in the third period.”