Six in a Row for Tigers. 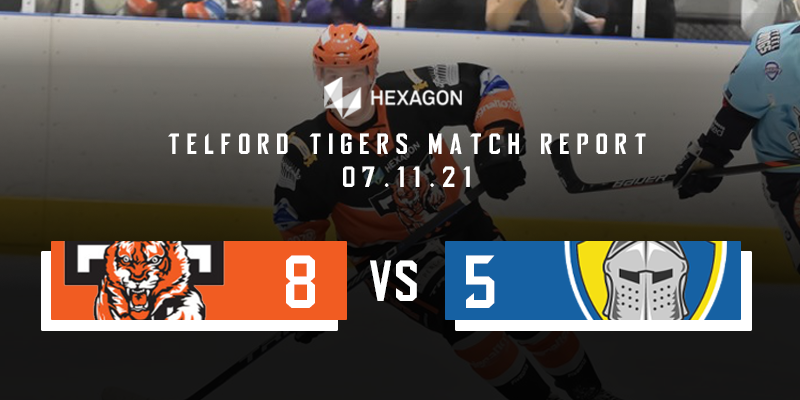 Six in a Row for Tigers. Hexagon Telford Tigers returned to home ice for the second of back-to-back games against Leeds Knights after a terrific 7-4 road win over the same opponent. Tigers were on a winning streak that currently stood at 5 games and the early season form had seen them climb to second in the early league standings with Sheffield Steeldogs only a point ahead at the top of the table.

Tigers have welcomed back Jonathan Weaver from injury in the previous game but Ross Connolly, Jack Hopkins and Brad Day were still unavailable.

Tigers played well during the first period but somehow went into the break level.  Leeds opened the scoring in the third minute of the game after a shot from Kieran Brown was saved by Jordan Lawday in the Tigers’ goal but Brandon Whistle was on hand to tap the rebound home. Tigers responded within a minute when Ricky Plant won the puck inside the Leeds defensive zone and sent the puck to Jason Silverthorn. Silverthorn sent a deft pass into the path of Scott McKenzie who buried a wrist shot past Tyler Perre in the Leeds’ goal.  Tigers then took the lead, Danny Rose hit a shot from the left circle which was deflected brilliantly by Silverthorn through Perre’s legs and into the net to put Tigers 2-1 ahead.  Leeds levelled the game shortly after with a power-play goal. Tigers were unhappy about the award of the penalty as there appeared to be a clear icing infringement by Leeds in the build-up to the penalty being awarded which would have negated the play. Whistle scored his second of the game after Rose had been awarded a delay of game penalty.  Tigers regained the lead midway through the period with a terrific goal scored by McKenzie. Plant and Silverthorn were again the creators with some slick passing allowing McKenzie the chance to shoot through Perre’s legs for Tigers’ third goal.  As the period drew to a close, Leeds once again drew level. Joe Aston was given a harsh cross-checking penalty by referee Matthews which allowed Whistle to score his third goal of the period with a one time slap shot that flew past Lawday.

The fans were certainly getting their money’s worth and saw a further four goals in the second period. Leeds took the lead early in the period with another power-play goal after Corey Goodison was called for hooking. Adam Barnes scoring for Leeds from close range. It was harsh on Telford to be behind in the game but midway through the period, they were deservedly level again. Leeds were awarded a too many men penalty after having 7 players on the ice briefly, allowing Tigers a power-play chance. Tigers controlled possession well and McKenzie sent a cross-ice pass to Silverthorn who skated towards goal, deked and sent a backhanded shot low past Perre. With the game firmly in the balance, Tigers required Lawday to pull off a superb save denying Whistle at point-blank range.

With the period entering the final five minutes, Tigers struck twice in quick succession to go ahead. First, Austin Mitchell-King scored from close range after Plant had forced a save from Perre, putting Tigers 5-4 ahead. Within a minute, the lead was 6-4 after Weaver found the unmarked Fin Howells in the slot, allowing Howells time to send the puck into the top right-hand corner and give Tigers a deserved two-goal lead heading into the break.

Tigers started the third period with a minute of power-play time left over after Ben Solder had taken a hooking penalty late in the second period. Weaver needed just nineteen seconds to score and seemingly put the game out of Leeds’ reach. Once again, Ricky Plant was at the heart of the move sending a pass across the ice to Weaver who smashed a slap shot past Perre.  Leeds fought back again and scored through Kieran Brown to narrow the lead to two goals. Tigers continued to maintain possession and prevent Leeds from getting any further chances. After a flurry of penalties late in the game which broke up play, Leeds pulled Perre from the goal for the final minute and had a face-off in the Telford defensive zone. Leeds won the face-off but the puck broke to Corey Goodison who was behind the Tigers’ goal line. The Tigers’ defenseman lifted the puck high in the air and the whole rink held their breath as the puck looped up, landed on the ice and dropped into the net to give Tigers the eighth goal. The win gives Telford back-to-back wins over their Yorkshire opponents and the sixth win in a row.

Following the game Head Coach Tom Watkins, said, “I’m pleased to be on the right side of the result as it was a game that swung both ways and as a coach it doesn’t feel like you have any control so it’s a little frustrating but the boys dug deep again and found the goals when it mattered. I thought we were guilty of missing some good chances and letting Leeds back into the game. Silvs (Silverthorn) was tremendous all night and helped us control that match up and outscore their top line when we were playing 5 on 5.”