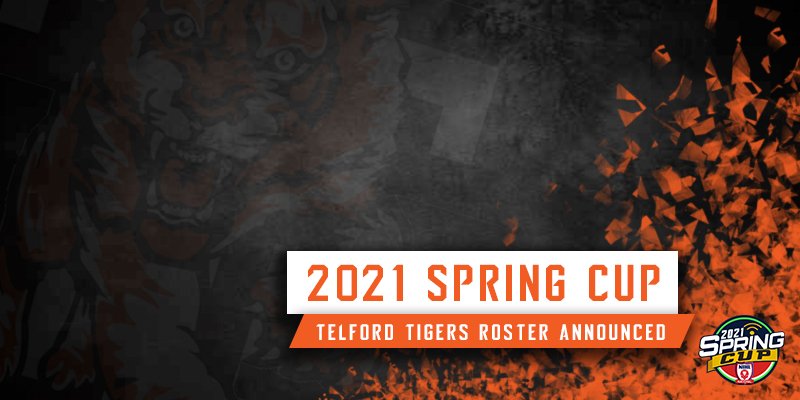 Spring Cup Roster Announced – Telford Tigers are delighted to confirm their roster ahead of the start of the National League Spring Cup. The competition will see five teams taking part during February and March when Tigers will take on: Sheffield Steeldogs, Swindon Wildcats, Bees and Raiders.

The format of the newly announced cup will see the teams playing each other home and away over seven weekends. Each team will play each other three times totalling twelve games each per club. The top placed team, at the end of the series, will be awarded the cup.

All games are to be played behind closed doors, with the live streaming of games where facilities are available. Club Chairman Mike Washburn has confirmed that games in Telford will be live-streamed.

The Tigers’ Rosters is as follows:

Tom Watkins, Head Coach and General Manager, commented, “What a great opportunity we have all been given. We understand how fortunate we are to be in a position to get back on the ice in a competitive environment which is testament to the hard work and sacrifices made by all of our nation’s key workers. The pandemic has had a significant impact on all our lives and I’d like to pass on our best wishes to all those who have lost loves ones during this time.

The Spring Cup has provided us with a timely boost during a period when it seemed that any hockey this season would be lost. There will be nothing normal about this competition, all fixtures will be played behind closed doors with no fans in the building. Therefore, it is up to us as a team to create our own atmosphere in the rink and on the bench. I’m sure after such a long layoff, no-one will require motivating. It’s great news that all teams will be live streaming games, this is fantastic news for our fans.

In the last 7 days, we have undertaken the mammoth task of getting the team ready to take to the ice for our first fixture. This time last week we had no playing roster, no team strips, no sponsors signed up, no streaming plans, no fixtures, no bus travel, no equipment and no COVID policies in place.  I’m very happy to say that in the last week we have ticked off many things on our very long to-do list to ensure that we are ready to get back onto the ice, but more importantly, that we can do so in the safest environment possible for all players, coaches, officials and match volunteers.

I approached the players who had previously agreed to join us in the summer, to play in the Spring Cup. Unfortunately, we weren’t in a position to accommodate all the players who had previously agreed to sign due to other commitments but hopefully in the near future we can see them in a Tigers shirt! All the players have been very supportive and, within 48 hours, we had 90% of the roster complete. With only 5 teams taking part, it sadly leaves a lot of guys without a place to play. The sheer number of players who have been in contact really took me by surprise.

I’m excited by the roster we have. They are a talented core of players who have been with the club for some time and who have had success with a league and cup double last season. I think with the limited time we have for preparation, the familiarity of the group will be an advantage. We’ve got solid goaltending as we witnessed last season with Brad Day returning. In Zack Brown, we have an able back up too. The strength of our D-core will play a big part as ever and with familiar D pairings of Weaver/Goodison, Rose/McKinnon and Nick Oliver we have a committed group. With the addition of David Clements from Coventry Blaze adding size, mobility and a heavy shot, we have a guy who can play in all situations.

Offensively, I really like the blend of energy and talent we have in the group combined with the experience of players like Jason Silverthorn, Scott McKenzie, Jack Watkins and Rick Plant. Plus, we have the talent of Joe Aston, Dan Mitchell, Fin Howells and Sam Watkins and what they bring to the team. We have new faces in Ashley Calvert who comes to the club with a point to prove and has shown he can put the puck in the net during his time in Sheffield and he adds some grit. I’m excited to see the impact that Austin Mitchell-King will make too. He’s a big body and I like what I saw when I watched him with the Great Britain U20s. Finally, Great Britain international and Coventry Blaze forward Ross Venus joins the club. Ross is coming off the back of his best offensive season and he was the second-highest British points scorer in the Elite League last year.

We may have one or two more players to add to the team, but I believe we already have a very strong line up to compete in the Spring Cup.”

Tigers will release details of the fixture schedule and streaming costs of games, shortly. Watch out for further details about fixtures and streaming information at Telford Tigers, visit: https://www.telfordtigers.net/news or catch up on Facebook or Twitter