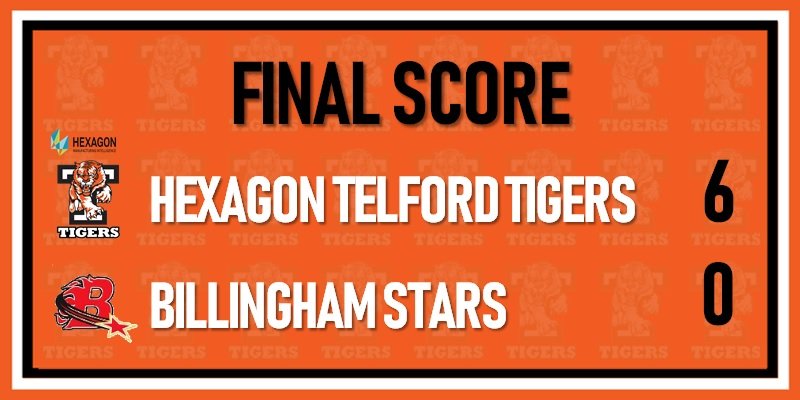 Taylor Stars in 6 goal cup win.  Hexagon Telford Tigers 1 faced off against Billingham Stars in the NIHL North Cup on Saturday night at Telford Ice Rink. Tigers were unbeaten in their North Cup games this season having won a closely fought battle away against Blackburn Hawks 4-2 and beating Solway Sharks 6-1 at home.

Billingham came into the game top of the cup table 2 points ahead of Telford albeit having played three more games than Tigers. Not icing for Telford were Scott McKenzie, Dan Mitchell and Jed Moreland.

Tigers dominated the first period and opened the scoring in the second minute. Warren Tait’s shot was saved by Billingham net minder James Flavell with his stick, but the puck flew up in the air and hit a Billingham defender and rebounded into the net. Tait was given credit for the goal as the last Tigers’ player to touch the puck. Tigers had numerous chances to increase the lead, including a glorious chance for Doug Clarkson who missed the goal with a wrist shot from close range. It was a surprise that the Tigers’ second goal didn’t arrive until the 13th minute, such was their dominance. Adam Taylor showed superb stick handling skills to beat a Billingham defender and place a precise shot low into the net. Shortly after, Billingham’s Jack Emerson took a hooking penalty giving Tigers their first power play of the night. Tigers took full advantage of the extra man with Jonathan Weaver’s shot from the point being tipped by Taylor into the net for the third goal.

The second period saw Billingham in much better form and it became a more even game. Early in the period, Billingham’s captain Michael Elder was sent clear one on one with Tigers’ net minder Denis Bell, but Elder’s shot was well wide of the goal. Tigers’ captain Jason Silverthorn then went clear at the other end but his shot was saved by Flavell. Billingham’s Kevin Boyd then had a good chance but Bell saved with his blocker. Shortly after, Chris Sykes was sent clear with a pass from the Billingham defensive zone, but Bell was again quick to react making a good save to maintain Tigers’ three goal lead at the end of the period.

Tigers scored their fourth goal just after the start of the third period. Clarkson’s initial shot was saved but he was first to the rebound and tapped the puck over the line. Tigers’ Joe Aston was then given a match penalty for fighting and ejected from the game, giving Billingham a 5 minute power play. Tigers managed to kill off the penalty and came close to scoring when Tait managed to battle into the Billingham defensive zone but his shot was saved.

Tigers were then given a 5 on 3 power play when Michael Bowman and Edgar Protchenko were given penalties. At the start of the power play, Weaver and Clarkson exchanged passes and Clarkson hammered a powerful shot from the right circle, which flew past Flavell for the 5th goal.

As the game headed towards its conclusion Tigers were given a further power play when Elder was given an interference penalty. Clarkson and Weaver combined again, this time Clarkson passed to Weaver who smashed an unstoppable shot into the net for the 6th goal. In the last minute of the game, Bell was called upon for the final time when Kevin Boyd was sent clear one on one, but Bell pulled off a terrific stick save to maintain his shut out. Tigers’ win puts them top of the North Cup table after three consecutive wins in the competition.

After the game Coach Tom Watkins said, “ It was a good result and I was pleased for Denis getting the shutout. He thoroughly deserved it after back stopping us in the second period when we played a bit flat. Adam Taylor played a heck of game and I was pleased with our special teams this evening, we were 100% on the penalty kill and 75% on the power play, which are very high numbers. We can’t shut off though, we got outplayed in the second period but rebounded in the third and upped our level.”