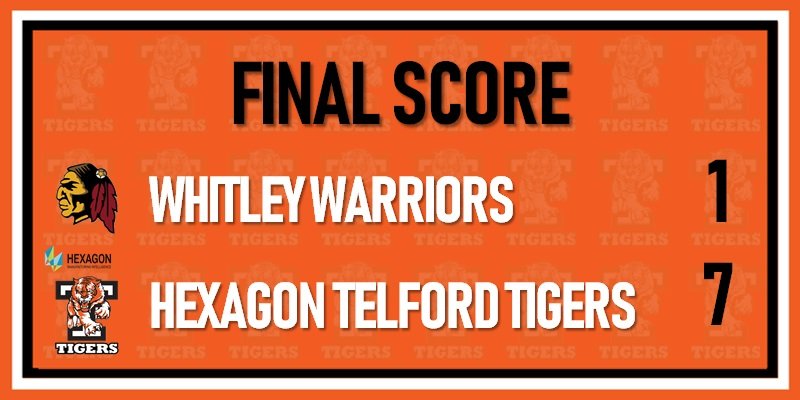 Tigers Roar to Seven Goal Victory.  Hexagon Telford Tigers 1 returned to NIHL Moralee Division action in Whitley Bay on Sunday night. Tigers had won 6-0 against Billingham Stars in the NIHL North Cup the previous evening and were playing their first league game since early in September. Tigers were without Scott McKenzie, Joe Aston and Nick Oliver but were able to add Dan Mitchell and Jed Moreland to the line up.

Tigers’ habit of starting slowly in games this season appears to have vanished as, 5 minutes into the game, Jack Watkins scored for Tigers from Warren Tait’s pass. Shortly after, Tigers then added a second goal, this time Doug Clarkson scored from Andy McKinney’s pass. Late in the period, Jason Silverthorn appeared to have scored the third goal but the referee did not see the puck enter the net and played on. The reprieve was short lived as Clarkson buried a wrist shot into the net for his second goal and Tigers’ third to end a dominant period.

Tigers continued their dominance on the scoresheet in the second period. In the 23rd minute Silverthorn set up Dan Mitchell for Tigers’ fourth goal and was closely followed by a neat finish from McKinney for the fifth. Whitley changed net minders at this point with Jordan Boyle being replaced by Richard Lawson for the rest of the game.

Tigers started the final period as strongly as the previous two and scored their sixth goal just 55 seconds into the period. Clarkson completing his hat trick after being set up by Danny Rose. Tigers’ net minder Denis Bell was just 8 minutes away from back to back shut outs but Whitley’s Shaun Kippen beat him low down to score a consolation goal for the Warriors. Tigers would have the last say on the scoresheet when Clarkson scored late on with a powerful slap shot to add his fourth and Tigers’ seventh goal of the game. Clarkson’s final tally taking him to 10 goals in just 4 games.

After the game Coach Tom Watkins said, “It was a good weekend’s results. It is always a good feeling when you pick up 4 points, the guys can enjoy the long trip home tonight.  We started well tonight and were able to play with the lead all evening. I think the score flattered us a little, Whitley worked hard and created chances and shots on goal were pretty even. I must acknowledge the fans in Whitley, they were very supportive and vocal, cheering and chanting for the Warriors until they left ice at the end of the game tonight.”