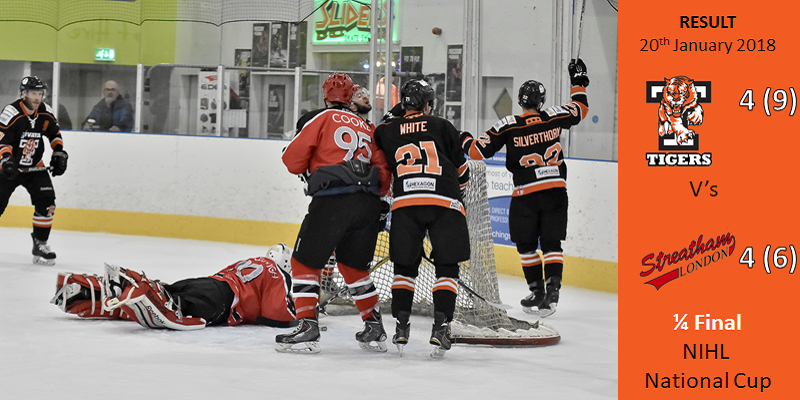 Telford Tigers 1 played the 2nd leg of the NIHL National Cup Quarter Final on Saturday night against Streatham at Telford Ice Rink.  Tigers started the game with a 3 goal aggregate lead after winning the 1st Leg 5-2 last Sunday in Streatham.  Tigers were without the injured Jack Watkins after it was revealed he played half of the game against Solihull the previous week with a broken collarbone.

New signing Filip Supa made his first start at home since signing for the Tigers last week.

Streatham took a number of penalties in the 1st period and Tigers though they had opened the scoring when Jason Silverthorn scored from close range but referee Hamilton ruled that the goal was off its moorings and disallowed the goal.  Tigers finally got on the scoresheet in the 17th minute whilst on a 5 on 3 power play. Tigers took full advantage of the 2 man advantage when Silverthorn’s initial shot was saved, leaving Scott McKenzie to fire the rebound into the roof of the net to leave Tigers ahead 1-0 at the end of the 1st period.

Streatham responded with a power play goal of their own in the 28th minute when Ryan Webb scored and they took the lead through Aidan Doughty in the 33rd minute. Shortly after Tigers equalised with a 2nd power play goal of the night. Jonathan Weaver collected his own rebound to flick the puck off Streatham’s net minder Matthew Colclough into the net. Tigers would end the period firmly in charge of the tie when Ricky Plant put Tigers 3-2 ahead in the 37th minute, scoring from close range after Silverthorn’s shot was saved.

The 3rd period was only 32 seconds old when Tigers got their 4th goal. Jonathan Weaver led a 2 on 1 breakaway and passed to Brodie Jesson who fired home with a perfect wrist shot. Tigers then conceded a goal just 9 seconds later when Doughty scored his 2nd goal of the night. Streatham levelled the game in the 48th minute when Doughty completed his hat trick.  Both teams would have chances before the end of the game but no further goals scored. Jesson thought he had won the game with a shot as the final buzzer sounded, but referee Hamilton ruled the puck had entered the net after the buzzer and disallowed the goal.  Tigers drawing on the night, but advance to the semi finals with the overall aggregate win.

Man of the match – Jonathan Weaver

After the game Coach Tom Watkins said, “I am very pleased to progress to the semi final but frustrated not to win on the night. Credit to Streatham, they never went away, frustrated us and kept coming and coming. Our power play didn’t click tonight when I felt we carved some good opportunities and actually moved the puck pretty well, then ran into a few late calls which left us playing short handed. We are looking forward to the next round.“