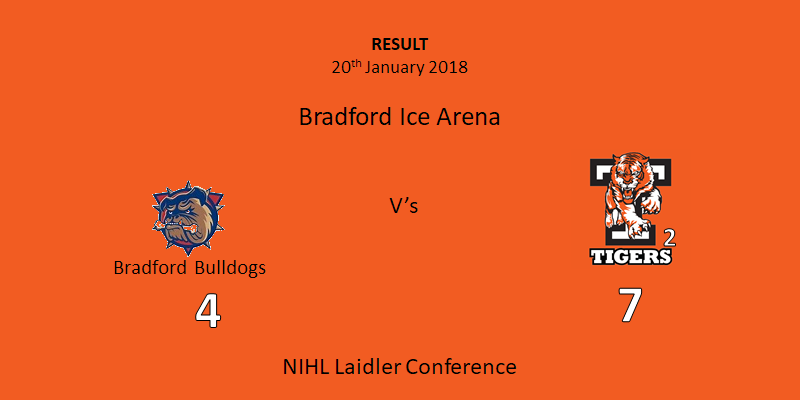 Telford Tigers 2 took to the road this Saturday, eager to bring home another 2 points and make it their 10th consecutive win.

It was a gritty game right from the first puck drop with both teams battling hard. Tigers displayed some quality play from the start, and Bradford weren’t far behind either.

At 8:48, Bradford managed to score their first goal, putting them into an early lead. Tigers weren’t settling for the defeat and pressed on in order to equalise the score line. Player coach Callum Bowley delivered the first Tigers goal at 15:42, assisted by #18 Hustwick and #4 Jets. The remainder of the period saw both teams digging for an extra goal to finish the period in their favour but neither team succeeded. The first period ended with one goal apiece.

The puck dropped for the second period and it was the Bulldogs who came out on top to start off with. A second goal for them at 21:23 from McDonald saw Bradford sneak into the lead yet again. The Bulldogs were doing everything they could to ensure they stayed in the lead however, a cross check penalty for Liam Salt saw the hosts end up with only 4 men on the ice.

Tigers took advantage of their power play and #91 Charlie Hammerton buried the puck in the top right corner of Bradford’s net at 22:43. Tigers began to dominate the ice pad with a third goal only 13 seconds later. Tigers’ D man Matt Price started the move off by making a great cross ice pass to #40 Ben Washburn. Washburn cut inside and then back out again firing a low driven shot into the net minders pad, with the rebound perfectly setting #27 Callum Griffin up to fire the puck home into the top corner at 23:56.

With only a slim lead, Tigers continued to put the pressure on the Bulldogs and another power play goal at 25:04 from Hustwick put the Tigers in a 2 goal lead. The goals didn’t stop their for the boys in Orange and Black with #72 Bowley scoring the Tigers’ 5th goal at 26:29, assisted by #4 Jets. The Bulldogs began to wobble and took a time out immediately after the goal. The period ended in the Tigers favour; Bulldogs 2, Tigers 5.

The third and final period was the Bulldogs last chance to win back some goals and steal the win. Yet again it was a gritty start to the period with both teams digging deep for goals. It was the Bulldogs to pounce first in the final period with Myles Dacres scoring their third goal of the game at 47:05. It didn’t take long for the visitors to respond to this with Tigers’ Captain Karol Jets scoring an even handed goal, and the Tigers 6th goal at 48:51. The bulldogs could feel the heat and started to get more physical which unfortunately for them resulted in receiving a penalty for boarding at 49:31.

Again, Tigers took advantage of the power play and Karol Jets managed to get the puck in the Bulldogs net once again. The goal was timed at 50:02 with an assist from #91 Charlie Hammerton and #39 Joe Aston.

The Tigers had 10 minutes left in play with a comfortable lead however, the Bulldogs managed to get the puck past netminder Zack Brown with their 4th goal at 58:18.

Two minutes later and the sound of the buzzer went! A disappointing game for hardworking and persistent Bradford Bulldogs but a 10th consecutive win for Telford Tigers 2. The Telford boys take home the 2 points and prepare for Sunday’s home game against Coventry Blaze NIHL, in hope to make it another 4 point weekend!