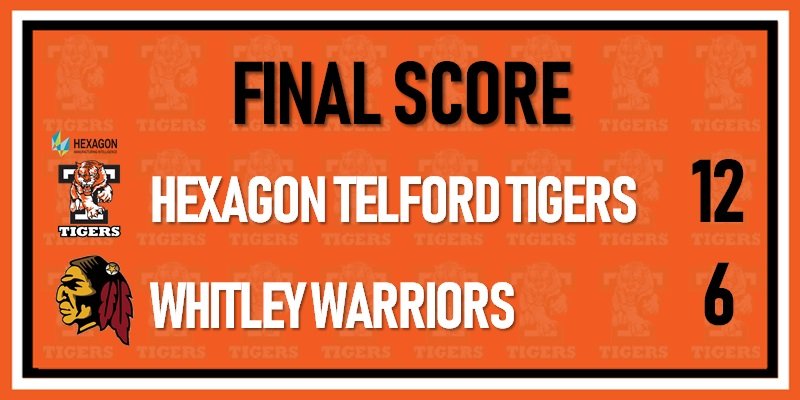 The Hexagon Telford Tigers 1 faced off against Whitley Warriors on Saturday night at Telford Ice Rink. Tigers had opened the season with a 12-1 win over Nottingham Lions and had beaten Whitley 8-2 on the road last Sunday to top the early league table.

Tigers were very slow to get out of the blocks and conceded a goal after just 48 seconds on Whitley’s first shot of the game. Former Tigers’ player Sam Zajac’s shot deceived Tigers’ net minder Denis Bell and bounced into the net. Jason Silverthorn hit the bar with a powerful shot in the 6th minute and Whitley broke away to extend their lead as Ben Campbell scored with a tidy finish.  Things got worse for Tigers as Campbell scored his 2nd and Whitley’s 3rd goal in the 10th minute whilst on a power play. Whitley had scored 3 goals on 3 shots and Coach Tom Watkins decided to pull Bell at this point and replace him with back up Tom Hovell.

Tigers desperately needed the next goal to get back in the contest and it duly arrived in the 13th minute when Tigers were on a power play. The team kept the puck and moved it in the Whitley zone well until Silverthorn was presented with an opportunity and fired a wrist shot home. Tigers scored a 2nd goal in the 16th minute, Jordan Stokes’ shot was saved but Andy McKinney pounced to slam the rebound into the net. Tigers ended the period on top but trailed by 1 goal.

Just 29 seconds into the 2nd period, Scott McKenzie went clear and scored with a shot into the top corner to level the game. McKenzie then gave Tigers the lead with a goal from close range. Silverthorn added his 2nd of the night in the 30th minute with a calm finish, to give Tigers a 5-3 lead. Whitley refused to give up and scored their 4th goal through Shaun Kippin.  Things then got heated in the 34th minute when Tiger’s Brodie Jesson was given a game misconduct penalty for boarding, Whitley’s Ryan Sample took exception to this and was also given a game misconduct penalty, meaning both were ejected from the game. Whitley scored shortly after play had resumed, Campbell completed his hat trick when his shot was deflected off a Tigers’ defender into the net to level the game at 5-5.
Tigers would score the final goal of a frantic period to take a lead into the final 20 minutes of the game. McKenzie scored the best goal of the night showing fantastic stick handling skills to break clear and slot the puck past Lawson in the Whitley goal, to complete his hat trick.

The 3rd period saw Tigers take the game away from Whitley. Nick Oliver scored his 1st goal of the season to give Tigers a 7-5 lead, Silverthorn then scored his 3rd of the night and his 3rd hat trick of the season to extend the lead to 8-5. Whitley scored again through Daniel Good to reduce the lead to 8-6 before Corey Goodison blasted a slap shot from the blue line for the 9th goal. Jed Moreland then added the 10th after a great set up by McKinney. In the 51st minute, McKenzie scored his 4th of the night, smashing an unstoppable shot into the net for the 11th goal. Adam Taylor finished the game with a goal in the last 20 seconds to round off a 12-6 victory and an entertaining evening for the crowd.

After the game Coach Tom Watkins said, “Tonight was like watching the 1986 Castle Eden Cup Final! I am pleased that game is behind us, a few individual mistakes contributed to putting us behind by a 3-0 score line. We’re an easy team to play against if we don’t move our feet and play with a solid work ethic. We got out-worked and that shouldn’t happen.”

Watkins added, “We battled back and got ahead but we carried on making mistakes. We’ll have to put that behind us and look forward to a much improved performance tomorrow.”

Hexagon Telford Tigers 1 next play at Telford Ice Rink at 18:00 on Sunday 16th September against Peterborough Phantoms.  For details of all future fixtures, check out the Tigers 1 fixture list and www.telfordtigers.net/tickets for ticket information.