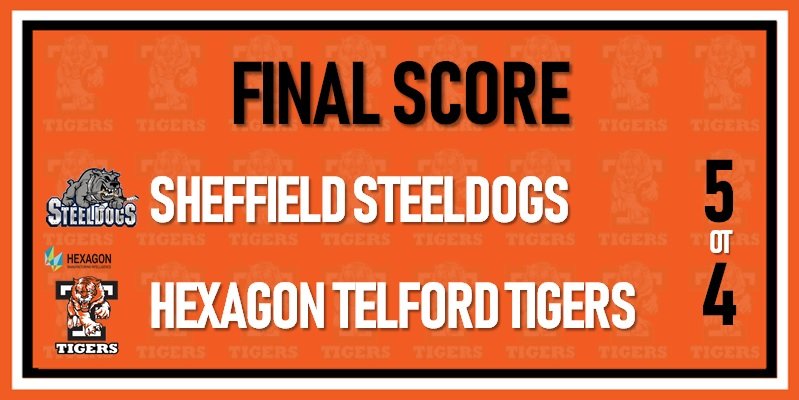 Hexagon Telford Tigers 1 travelled to Ice Sheffield on Sunday night to take on reigning champions Sheffield Steeldogs in a vital early season match up for a match that would end in overtime heartbreak. Tigers had beaten Whitley Warriors 12-6 on Saturday to stay top of the table, despite being 3-0 down early in the game.

Tigers started badly as they had done the previous night and conceded in the 3rd minute after Jason Silverthorn had taken a roughing penalty. Ashley Calvert scored for Sheffield from close range. Tigers went further behind in the 4th minute when a low shot from Cameron Brownley snuck past the pads of Tigers’ net minder Denis Bell. Things got even worse for Tigers in the 13th minute, Charles Thompson’s shot was initially saved by Bell but the puck fell to Andrew Hirst, who hit a fierce shot into the corner of the net before Bell could get back to his feet.

Tigers finally got on the scoresheet with their first chance of the game in the 16th minute. Tigers were on a power play and made full advantage of the extra man with some neat passing between Silverthorn and Jonathan Weaver leaving Ricky Plant free at the far post to score. Tigers ended the period losing 3-1 and chasing the game.

The 2nd period saw both sides taking plenty of penalties and this made the game scrappy. Tigers’ Brodie Jesson missed a breakaway chance and Andy McKinney’s close range shot was well saved by Sheffield’s net minder Dimitri Zimozdra. The only goal of the period was scored by Tigers whilst shorthanded, after Jed Moreland had taken a roughing penalty for a hit on former Tigers’ player Milan Kolena. As Sheffield attacked, Weaver stole the puck and passed to Silverthorn who found Plant in space to score with a precise wrist shot, sending Tigers into the break just one goal behind.

The 3rd period was a tense one, Tigers threatened but just couldn’t get the breakthrough. Weaver went close with a back handed shot and Silverthorn hit the post. As the game entered its latter stages, Bell was pulled to give Tigers an extra attacker. Sheffield managed to score an empty net goal in the 59th minute, Duncan Speirs shooting from long distance to give Sheffield a 4-2 lead. Just as it looked like the game was gone, Scott McKenzie scored with 52 seconds left, tapping in from close range to bring Tigers back in it. Bell was again pulled to give Tigers an extra man and it paid off with Silverthorn forcing home the equaliser with 14 seconds left after another goalmouth scramble.
The game went into 5 minutes of sudden death overtime, but it would be Sheffield who would take the 2 points after Weaver was given a penalty for interference and Sheffield scored a power play goal through Kolena with 3 minutes of overtime gone. Tigers gain 1 point as they fall to their 1st defeat of the season.

After the game Coach Tom Watkins said, “For two periods we played the way we need to play, with the right desire and passion to compete. For the first 20 minutes we didn’t look like we wanted to play. No team can afford to go behind 3 goals and expect to win. That’s twice in two games and it’s unacceptable. We need to play with some jam from the get go. We showed good character to get something from the game at 3-0 down and 4–2 down with just over a minute to go, but I still feel like we dropped a point and I expect a higher standard of performance, we had too many passengers this weekend.”

Hexagon Telford Tigers 1 next play at Telford Ice Rink at 18:00 on Sunday 16th September against Peterborough Phantoms.  For details of all future fixtures, check out the Tigers 1 fixture list and www.telfordtigers.net/tickets for ticket information.