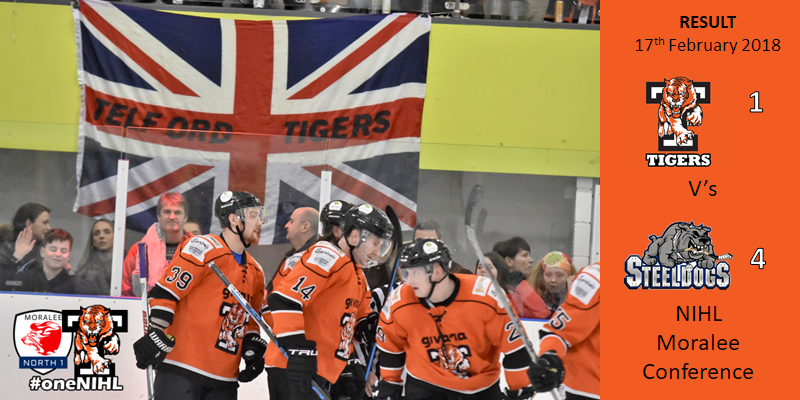 Tigers missed the chance to strengthen their position at the top of the table with a home defeat to their title rivals.  On Saturday night Telford Tigers hosted Sheffield Steeldogs in what has been a busy month of fixtures the Shropshire outfit.

With a Cup semi-final second leg coming up on Tuesday night against Swindon the Tigers were looking for a good performance.

The visitors appeared to be in a determined mood, putting pressure on the puck at every opportunity, not allowing the home side to settle and get into a rhythm.

Telford couldn’t get going in the first period and it ended with the Steeldogs ahead 1-0.

The second period started with the Tigers receiving a 2 minute penalty, Nick Oliver adjudged to be guilty of tripping.

With the home crowd making plenty of noise Telford picked up their game and found themselves level in the 24th minute, Nick Oliver beating Steeldogs net minder Dmitri Zimozdra, Scott McKenzie and Jonathan Weaver credited with the assists. The game was on a knife edge with both sides looking for the all-important win.

Thanks to the vocal away contingent the atmosphere was as you’d expect a top of the table clash to be, with the Telford support in fine voice accompanied with banging drums.

With 5 minutes remaining in the period Sheffield delivered a body blow that the Tigers never really recovered from, Cameron Brownley putting his team 2-1 in front, finishing a fine move down the ice assisted by Adrian Palak and Liam Charnock.

Telford had it all to play for in the final period and they throw the kitchen sink at Sheffield, but couldn’t find an equalising goal, eventually pulling their net minder Denis Bell to try to get level.

Sadly it was the Steeldogs who got the next and crucial goal, Kolena scoring his second of the match, an empty net goal with less than 2 minutes left to play.

There was still time left for another goal, with the Tigers again pulling Bell in favour of an extra skater, Sheffield managed to wrestle control of the puck and Ben Morgan scored in the empty net to make absolutely sure of maximum points.

The title hasn’t been decided yet and with seven league games left Telford is still in the mix for silverware.