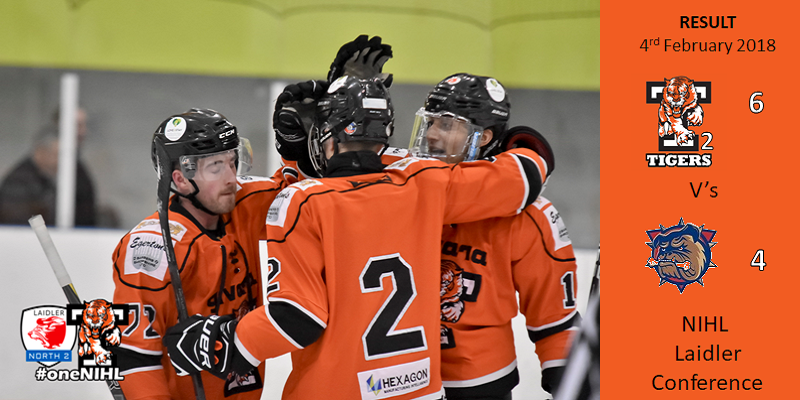 After suffering their first defeat in 13 games against Sutton Sting last weekend, Telford Tigers 2 were looking to get back on track with their winning ways! On Sunday, the Tigers were hosts to Bradford Bulldogs for their final encounter in the 2017/18 Laidler Conference.

The puck dropped for the first period and Tigers 2 quickly had control of the game. A delay of the game penalty given to Bulldogs’ Kemp only 2 minutes into the game allowed the Tigers to take advantage of the powerplay and score the first goal of the game at 4:06. The goal was scored by player coach Callum Bowley, assisted by #91 Hammerton and #18 Hustwick.

The Bulldogs wanted to bite back, but none of their shots could get past Tigers’ netminder Zack Brown. Rough play in front of the Tigers net resulted in a fight breaking out at 12:12 between Tigers’ Preece and Bulldogs’ Higson. Bulldogs found themselves short on men on the ice picking up several penalties: #8 Higson – 2+2 roughing, #46 Kushnirenko – 2 minutes cross check and #57 Salt – 2 minutes roughing.

With the Tigers on another powerplay, they managed to get the puck into the Bulldogs’ net yet again at 12:24, this time it was from #18 Josh Hustwick. The boys in orange found themselves picking up the pace and scored another goal less than one minute later with a Bowley scoring his second powerplay goal at 13:19!

The Bulldogs found themselves chasing the puck for the remainder of the first period as the Tigers dominated their home ice! Before the period could end, #11 Brandon Anderton scored the Tigers’ fourth goal of the game at 18:52, assisted by Tigers Junior #2 Rhys Howells and #72 Bowley. The first period ended in Tigers 4, Bulldogs 0.

The puck dropped for the second period and the Tigers created plenty of chances early on but couldn’t get the puck in the Bulldogs’ net. It was Bradford who had the first goal of the second period with a powerplay goal at 30:43. The Bulldog’s continued to put pressure on the home team and managed to score their second goal only two minutes later at 32:38.

The Tigers knew they had to step up their game and quickly responded to the conceded gaols with their fifth goal of the game at 35:18, a short-handed gaol from #39 Joe Aston, assisted by yet again #91 Hammerton and #18 Hustwick. The second period ended in Tigers 5, Bulldogs 2.

7 minutes later and #39 Aston strikes again sealing the Tigers’ sixth goal at 48:38, giving the boys in orange a goal safety blanket! The tired looking Bulldogs found themselves chasing the puck for the final 10 minutes of the game, unable to finish any of the created goal chances. The buzzer sounded for the final time and it was Tigers 2 who took the win! Just as we thought things were over, a fracas during the handshake caused uproar between the two teams! Bulldogs’ Reece Cairney-Witter was penalised with a 5+game penalty and Tigers’ Joe Aston was given 2 minutes also for slashing.