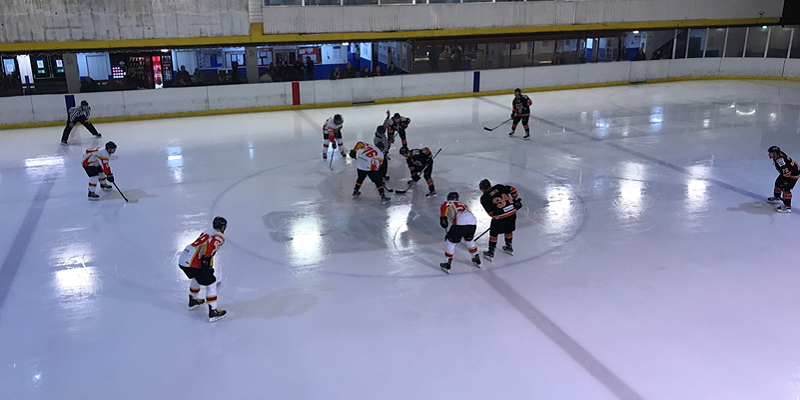 Telford Tigers 2 took a road trip to Bradford on Saturday night, raring to go after their 4-point weekend from the previous week.

Tigers 2 started the first period by chasing the Bulldogs and found themselves a goal down within the first 4 minutes with Bradford’s Alan Gray scoring an even-handed goal. It didn’t take long for Tigers 2 to bounce back with a power play goal less than 2 minutes later from Jets, Smith and Bowley.

The remainder of period 1 saw both teams pushing hard to take the lead but another Bulldogs goal at 13 minutes sent Tigers 2 back to the drawing board. The Bulldogs goal didn’t scare off the Tigers and they were able to strike back shortly after with Scott Venus picking up a power play goal on the 14th minute mark. There was no stopping the Bulldogs and another goal saw them take the lead to end the first period 3-2 in Bradford’s favour.

Player coach Callum Bowley was determined to end the second period with a score in the Tigers favour. Tigers 2 responded with goals from Captain, Karol Jets and Assistant Captain, Matt Price at the half way mark of the game. Tigers 2 continued to put pressure on the Bulldogs with only 7 shots on Tigers 2 netminder Louis Edwards and 17 shots on the Bulldogs. As the second period began to wrap up, the Bulldogs managed to get the puck in the Tigers net yet again. The period ended with a slim lead for the Tigers at 4-5.

The start of the final period belonged to Bradford, with an equalising goal within 4 minutes of the period starting. A fast paced and physical battle saw Tigers 2 Captain; Jets score his hat-trick goal at 47.51. Tigers 2 continued to hold the lead and a 2-minute boarding penalty for Bulldogs’ Stockton saw the Tigers take advantage and increase their lead further with a power play goal from Liam Preece at 53.35. With less than a minute to go, Bulldogs pulled their net minder and almost suffer conceding an empty net goal.

Man of the match – Ben Washburn.

Player Coach Callum Bowley said after the game – “I thought we played fairly well against Bradford, especially as we were short benched and were missing some key players from our line-up. Offensively, we created numerous chances which was pleasing, but we should have converted much more than we did on the night and not have given them the opportunity to stay in the game. The guys showed great spirit, togetherness and determination for the full 60 minutes. We did at times switch off and make the game hard for ourselves, but it was great to see us grind out a result to keep our winning run intact.”