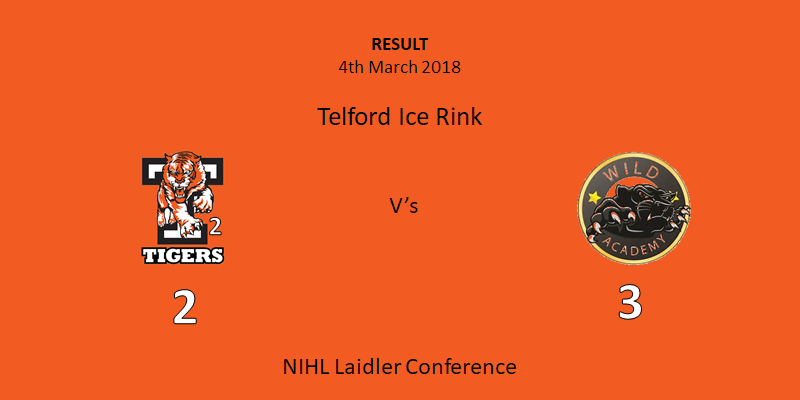 Telford Tigers 2 fell to a 2-3 defeat at home against Widnes Wild on Sunday evening. With only a few games left in the 2017/18 season, both teams were looking take the 2 points up for grabs. Tigers 2 are still battling for a play-off spot and Sunday’s loss now puts on even more pressure for Tigers.

It was a physical game right from the start with both teams digging deep to get a goal. The ice was dominated by Widnes for most the period, keeping Tigers on their toes throughout. Tigers also created several chances but were also unable to finish any. However, it was the Wild who took the lead in the first period, but this wasn’t until the final minute of the period. The first period ended Tigers 0, Wild 1.

The puck dropped for the second period and Tigers were determined to equalise the score. Past the half way point of the game and Wild managed to find the back of the Tigers net again. Their second goal at 32:12 put the guests in a 2-goal lead but there was still all to play for! There was plenty of action throughout the period with several penalties given to both sides although it was a fairy even matched period with a total of 11 shots on goal for Tigers and 12 for Widnes. The second period ended Tigers 0, Wild 2.

The third and final period was the Tigers’ final chance to win back the game! Tigers had a solid start to the period and just two minutes in they were back in the game; an even-handed goal scored by #4 Karol Jets at 42:13, assisted by #40 Ben Washburn and #90 Zack Brown. Tigers pushed for another goal to try and win back the game and at 51:01 they were a step closer to doing so! A charging penalty given to Wild’s Barlow allowed Tigers to dominate the ice on the powerplay and score their second goal of the game. It was Tigers’ Captain Karol Jets who scored again, with an assist from #91 Charlie Hammerton.

The game really started to get tough now with 2 goals apiece and less than 10 minutes in the game. Tigers worked hard to keep the puck out of their net but a 53:03 a shot from a rebound gave the Wild their third goal. Tigers tried their best to try and equalise the score line again but Wild’s netminder Matt Croyle wasn’t letting anything past him. At 57:17 Tigers decided to take their time out in an attempt to win back the game but it wasn’t enough. The final buzzer went and Wild took the win leaving Tigers disappointed despite their best efforts.