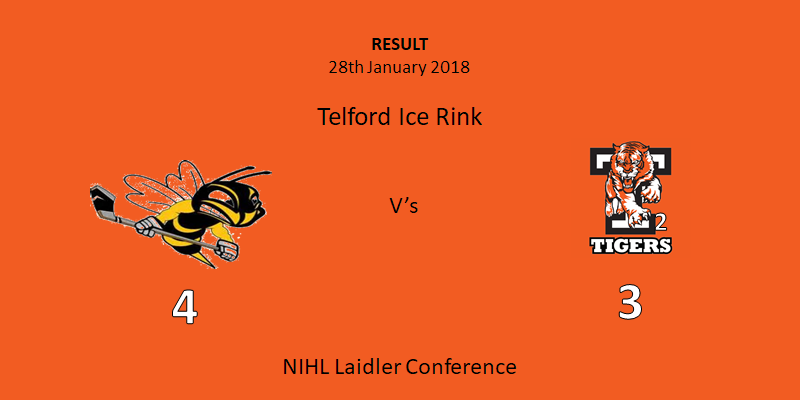 Telford Tigers 2 took to the road for their last away fixture of the month on Sunday; their third clash with Sutton Sting in the 2017/18 Laidler Conference.

It was a gritty game right from the first puck drop with both teams battling hard. Tigers displayed some quality play right from the start, with #18 Josh Hustwick scoring Tigers’ first goal of the game at 8:18, putting the visiting team in an early lead!

The period continued with chances being created on both sides however, a tripping penalty at 12:47 for Sting gave the Tigers a powerplay opportunity! Tigers began to pick up the tempo on the powerplay and another goal from Hustwick at 13:31, assisted by #39 Aston and #72 Bowley put the Tigers in a 2-goal lead. The period ended in the Tigers favour with Sting 0, Tigers 2.

The puck dropped for the second period and Tigers 2 knew they needed to keep the pressure on. With shots from both sides again keeping both netminders busy, it was the Tigers that found the back of the Sutton’s net. A hattrick goal from Hustwick at 31:05 put the Tigers in a tidy 3 goal lead at the half way point of the game!

With still a period left in the game, both teams had all to play for in the third and final period. The puck dropped and Tigers 2 were determined to take home the 2 points. With only 37 seconds passed on the clock for the third period, Sting’s Pyatt shoots and scores the Sting’s second goal of the game at 40:37. Sutton found their feet and started to dominant the ice by scoring their third goal only 4 minutes later at 44:43, equalising the score line. Tigers immediately decided to take their time out in hope that they could regroup and get themselves anther goal.

With only fifteen minutes of play left in the game, both teams were determined to get themselves another goal to avoid going into overtime which Sutton were defeated in only a few weeks back on Telford ice. Sting were creating setting up goals in front of the Tigers’ net and at 45:30, they succeeded in getting the puck past Tigers’ netminder Zack Brown.

The tired looking Tigers found themselves chasing the puck for the few minutes of the game, unable to finish any of the created goal chances. Just as everyone thought the game was over, a scrap between Sting’s Pyatt and Tigers’ Joe Aston paused the game. Only Aston was disciplined and picked up a hefty 14 penalty minutes for fighting at 59:56. With only 4 seconds of play left, Tigers were unable to equalise and suffered their first defeat in 13 games.

The next Tigers 2 game will be a home fixture on Sunday 4th February where they will be hosts to the Bradford Bulldogs for the final time this season.