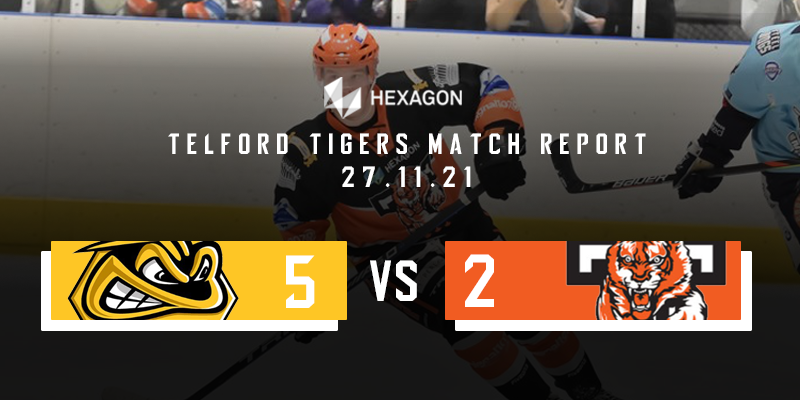 Tigers’ Away Day Blues. Hexagon Telford Tigers travelled to Slough for the first of back-to-back games against Bees. Tigers visited the new rink in Slough during the Spring Cup earlier this year, but this was the first visit there during the National League campaign. Bees had previously played as Bracknell Bees but after the closure of the rink in Bracknell forced the club to uproot, they are now known as just “Bees”.

Tigers came into the game having seen their unbeaten league run end by a defeat in Milton Keynes the week before and the team were keen to get back to winning ways.

Tigers started brightly and Austin Mitchell-King went close in the first minute but Adam Goss in the Bees’ net made a strong save. Shortly after, Andy McKinney was denied by Goss at point-blank range. With all the pressure, it was no surprise that Tigers took the lead. Mitchell-King’s shot was initially saved by Goss but the puck was sat in the goal crease, allowing Deakan Fielder to slam the puck home. Tigers added a second with a power-play goal after Dominik Gabaj was given a cross-checking penalty. Jonathan Weaver hit a shot at goal and Joe Aston was perfectly positioned in front of Goss to tip the puck into the net. With Tigers two goals ahead, the game changed and went downhill from there onwards. A late first-period goal for Bees from Josh Martin halved the Tigers’ lead and then, early in the second period, Bees’ Ivan Antonov shot through Brad Day’s legs to level the game. Bees then scored two goals to take control of the game. James Galazzi scored from close range to give Bees the lead, followed by a shot from Niklas Ornmarker that went through Day. Tigers ended the period behind by two goals and chasing the game.

Early in the third period, Antonov added his second of the game with a neat finish after being sent clear by Juha Lindgren and Tigers looked like a beaten team. Bees continued to be dangerous on the break and despite some late pressure by Telford, the result never looked in doubt. Tigers slump to consecutive defeats in the league yet have a chance to set the record straight with an immediate rematch with Bees in Telford.

After the game Head Coach Tom Watkins, commented, “We went 2-0 up and then conceded 5 unanswered goals, which I think just about sums up the performance.

We lacked quality, any sort of poise on the puck, threw pucks away needlessly so didn’t establish any sort of end zone pressure and when we did create chances, we were slow to get pucks off our sticks. I’m yet to see a team score good goals on us, we give up goals from individual mistakes, poor puck management or lost battles.”