Tigers’ Back to Winning Ways. 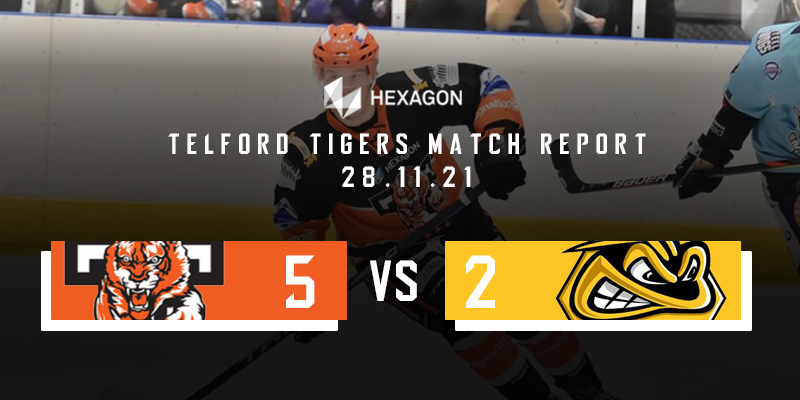 Tigers’ Back to Winning Ways. Hexagon Telford Tigers played the return leg of back-to-back games against Bees at Telford Ice Rink, fresh from a disappointing 5-2 defeat in Slough the previous day. Tigers returned to home ice and were still without Ricky Plant, Jack Watkins and Ross Connolly.

The game was fast-paced to start and whilst Tigers had most of the early attacking, it would be the Bees who opened the scoring. Niklas Ornmarker benefitting from a fortunate bounce as the puck hit a Tigers defender and landed perfectly for him to shoot past Jordan Lawday in the Tigers’ goal.  Tigers looked off the pace and lacklustre and got caught out again with another goal for the Bees. Harvey Stead shot at goal and Dominik Gabaj tipped the puck over Lawday and into the roof of the net.  Tigers managed a goal late in the period to get them on the scoresheet. Jack Hopkins sent Jason Silverthorn clear on goal and the Tigers’ captain beat Adam Goss low down with a wrist shot.

Before the period ended, the Tigers were left a player short for the rest of the game after a controversial referring decision cost them the services of Danny Rose. Ornmarker hit Rose with a cross-check and then held him down, preventing him from rejoining the play. Rose reacted by dropping the gloves but Ornmarker “turtled” and refused to fight. After the four officials conferred they gave Rose a game penalty, ejected him from the game and gave Bees a five-minute power play. Tigers had further cause for complaint when just nine seconds into the power play, Silverthorn was called for a very harsh boarding penalty when it appeared to be a legitimate hit. The officials evened things up immediately by sending Bees’ James Galazzi to the penalty box for tripping.

Tigers had to kill off three minutes of Rose’s penalty at the start of the second period and with some resolute defending managed to avoid conceding. The penalty kill galvanised Tigers and they seemed to have the bit between their teeth and immediately equalised.  Hopkins sent Fin Howells clear on goal and the Tigers’ forward hit a fierce shot at Goss, who parried it but then saw the puck bounce behind him into the net.  Tigers were then given a chance to take their first lead of the game with a power-play after Bayley Harewood was awarded an elbowing penalty. Tigers worked the power play well and Jonathan Weaver picked out Scott McKenzie in the slot. McKenzie steadied himself and then smashed an unstoppable shot past Goss to put Tigers 3-2 ahead.  Tigers were dominant and added a fourth goal shortly after. Hopkins again was the provider, sending a pass-through to Austin Mitchell-King who broke in on Goss’ goal and shot past the Bees’ netminder to give Tigers a deserved two-goal lead.

Tigers had numerous power-play chances in the third period but failed to take advantage of the Bees ill-discipline. But, the man advantage helped Tigers run down the clock. Bees pulled Goss from the goal for an extra attacker with almost four minutes of the game left and had some pressure on Lawday but Tigers were able to add a fifth goal. Weaver sent the puck the length of the ice into the empty net to seal the victory and see Telford pick up a much-needed win.

Following the final whistle, Head Coach Tom Watkins shared his thoughts, “We made a slow start in the first period which was frustrating, particularly after last night’s performance and result but we had a very strong second period and flipped the game on its head. It was similar to how the Bees changed the game on Saturday. With several guys missing and also losing Danny Rose when we did, we had a very important penalty kill on the 5-on-3 power play they had. We were able to kill that, which was a bit of a catalyst for our comeback. We upped the tempo, managed the puck at a higher level and were more efficient in the offensive zone. It was an important win for the team after the little skid we’ve been on these last few games. Especially as we have another tough weekend ahead with games against Swindon and Milton Keynes. “