Tigers Back To Winning Ways. 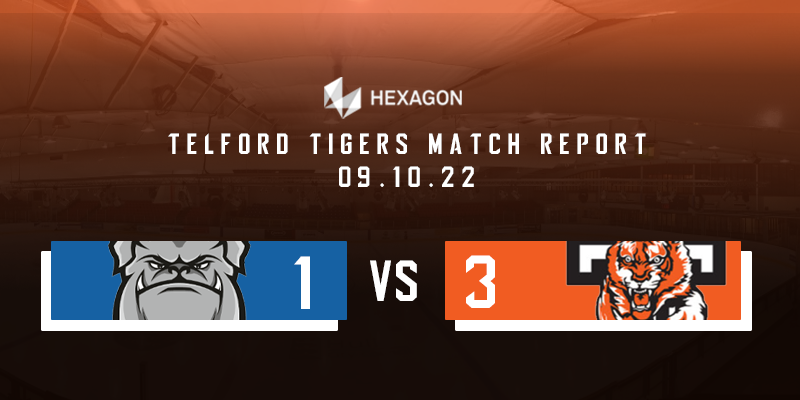 Tigers Back To Winning Ways. Hexagon Telford Tigers travelled to Sheffield to take on the Steeldogs for the first time this season. Tigers who had lost their previous two games were again without Jonathan Weaver, Nick Oliver and Deakan Fielder.

Sheffield started the brighter of the two teams in a scrappy first period and dominated the game’s opening minutes. Tigers needed a terrific double save from Brad Day early on to avoid going behind.

As the period progressed Telford started to get their game together and opened the scoring. Dimitri Zimozdra well saved Sam Watkins’ shot in the Sheffield goal but the puck broke to Daniel Mulcahy who shot into the open net for his first goal for the club since joining from Solihull Barons.

However, within a minute the hosts were level. A long-range shot was tipped in front of Day who managed to block the shot but the rebound fell to Jack Brammer for a tap-in to equalise.

Tigers were ahead again in the opening minute of the second period. Jason Hewitt was serving a tripping penalty when Tigers scored their second goal. Danny Rose hit a shot from the slot which appeared to be tipped in by Ricky Plant but the goal was awarded to Rose.

Tigers were the dominant team in the second period but once again were grateful to Day for keeping them ahead. The Tigers’ netminder made two superb saves from Alex Graham’s breakaways but the best save of the night was made from point-blank range when Brammer looked certain to score. Day threw himself across his goal crease and caught the shot in his glove to deny Brammer a certain equaliser.

Early in the third period, Tigers added a third goal. Sam Watkins won a face-off and passed to Lucas Price who hit a first-time shot that hit a Sheffield defender and was blocked, the puck landed perfectly for Price to shoot again but this time it flew low past Zimozdra and into the net.

Tigers then played sensible hockey for the rest of the game and with a two-goal lead to protect they didn’t overcommit defensively and with the Steeldogs not at their best Telford never looked like conceding again. Sheffield pulled Zimozdra from the net for the last minute of the game but rarely threatened with the extra attacker and Tigers held on for a valuable two points and ended their recent losing streak.

Man of the match: Lucas Price.

After the game Head Coach Tom Watkins, commented, “It was a tremendous effort, application and execution by everyone. A much more gritty and disciplined display. We were excellent on the penalty kill, we had players getting in lanes, blocking shots and winning battles. Our power play moved the puck well and scored a well-worked goal with our players doing a great job of screening their goalie.

I must also mention our four defensemen who logged a lot of ice time and it was good to see our third line chipping in with a couple of big goals.”