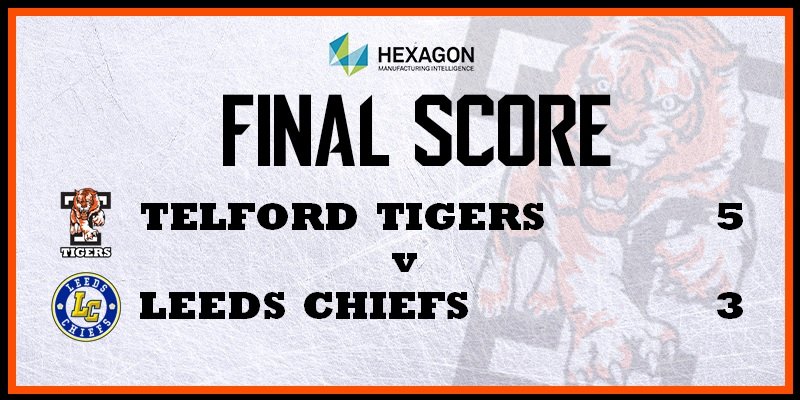 Tigers Battle to Late Win. Hexagon Telford Tigers took on the Leeds Chiefs on Saturday night at Telford Ice Rink. Tigers were sporting their special Halloween themed shirts for the visit of the Yorkshire team. Tigers’ injury list had grown considerably from the previous weekend with Ricky Plant, Jonathan Weaver, Adam Taylor and Joe Aston joining the already sidelined Jason Silverthorn and Ollie Lord. Tigers completed a fantastic 6-3 road win in Sheffield the previous weekend and the visitors won a landmark first ever 4 point weekend, setting up a clash in Shropshire. Brad Day started in goal for Telford, with former Tigers’ fan favourite – Sam Gospel in goal for Leeds.

Tigers started the game strongly and opened the scoring in the 5th minute. Scott McKenzie stripped a Leeds’ defender of the puck and passed across goal to Dominik Florian, who dispatched the puck past Gospel with a low wrist shot. In the 8th minute, Tigers’ Corey Goodison was lucky to escape with only a 2 minute penalty when he caught a Leeds’ player with a late hit that was called as kneeing, but could easily have seen the Telford defender ejected from the game. Tigers killed off the penalty but conceded another one immediately after when Ross Kennedy was called for high sticks. This time Leeds took advantage of the extra attacker with a goal from Andres Kopstals.

Tigers responded with a power play goal of their own in the 14th minute, after Leeds’ player coach Sam Zajac was called for a clipping penalty.  Florian’s shot proved too powerful for Gospel as the puck dropped out of his glove and Dan Mitchell was on hand to tap the puck in putting Tigers ahead 2-1.

The lead lasted less than a minute as Radek Meidl scored after some indecisiveness by the Tigers’ defence allowed the Leeds’ forward to score from close range. Things got worse for the Tigers with Leeds taking the lead just 20 seconds later. Steven Moore was allowed a free shot on goal and picked out the top corner with a fierce slap shot, giving Day no chance of saving it.

Both teams continued to trade penalties. The most controversial moment of the game occurred in the final minute of the period. Tigers appeared to have scored an equaliser after the puck was forced in after a goalmouth scramble. Gospel in the Leeds’ goal appeared to pull the puck back into play after it had gone over the line and into the goal. Referee Truswell ruled the goal out, despite the goal judge stating that the puck had crossed the line. Truswell and the other referee, Hewitt, conferred but did not award the goal much to the disgust of the Tigers’ players on the ice and the Tigers’ fans in the crowd. The period ended with Leeds ahead 3-2 and the boos from the Tigers’ faithful ringing in the ears of all 4 officials.

Tigers started the 2nd period with the perfect repost to the disallowed goal by levelling the game. Dan Mitchell worked the puck to Thomas McKinnon, who blasted a shot into the top corner of Gospel’s goal to tie the game at 3-3. Sadly, the rest of the period was dominated by calls from the referees that angered both team’s fans. Mitchell took 2 trips to the penalty box and was joined by Andy McKinney, Florian and Goodison for Telford. Leeds had James Archer, Luke Boothroyd, Robert Streetly, and Meidl given penalties reducing the period to a stop-start one that spoiled the game and ensured there was no flow to the action.

The 3rd period started with Leeds having an extended 5-on-3 power play which was killed off by Tigers. Brad Day in the Tigers’ goal pulled off a terrific save to keep the scores level. Danny Rose then had to react to a breakaway by Kopstals by tripping the Leeds’ forward when he was in on goal. The Tigers’ defender was lucky to not concede a penalty shot with Kopstals bearing down on goal when he was tripped. Adam Barnes then went close to breaking the deadlock with a shot that hit the bar and bounced on the line but did not cross it, and was then cleared by Day before a Leeds’ player could score. Tigers then had their own 5-on-3 power play but were denied when Scott McKenzie’s goal-bound shot was saved brilliantly by the glove of a sprawling Gospel.

With 3 minutes of the game left, Tigers were given one final power play when James Archer was called for hooking. With Leeds’ Boothroyd already in the penalty box, Tigers would have a brief 2 man advantage.  Goodison and Florian worked the puck brilliantly to McKenzie who fired a wrist shot over Gospel into the roof of the net to give Tigers a 4-3 lead and send the Tigers’ fans wild.

Day was called on once again to keep Tigers ahead, blocking a shot and ensuring the rebound was saved. Tigers cycled the puck forward and McKenzie showed terrific stick handling skills to send McKinney in on goal. McKinney beat Gospel and slid the puck into the open net to seal a 5-3 victory in a hard fought game.

After the match, Head Coach, Tom Watkins commented, “Tonight’s win is another two big points which is the most important thing and we continue to keep our unbeaten home record alive.

That is without a doubt one of the most frustrating games I have ever been involved with. I’m totally bemused by the officiating tonight, as were both sets of players and coaches. I just don’t understand the calls they made, the calls they missed or lack of ability to communicate. I never usually comment on the officials and never criticise them publicly but today was as poor a performance as I can remember, which affected both clubs tonight.”

Hexagon Telford Tigers 1 will next be in action on home ice on Saturday, 10th November against Hull Pirates. Match Night tickets available to purchase here!