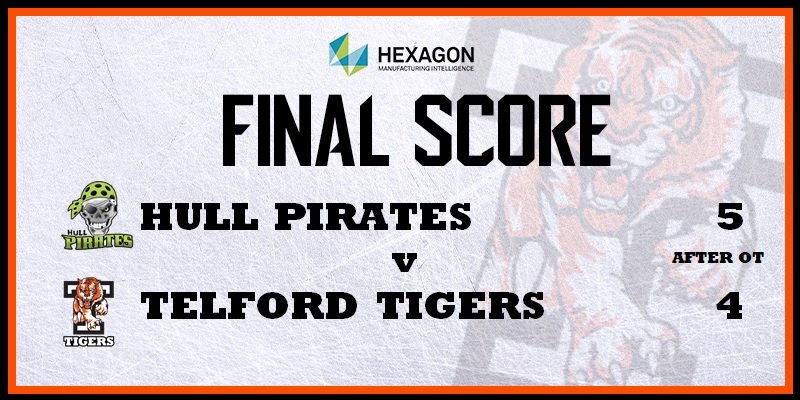 Tigers Plunder a Point in Overtime loss. Hexagon Telford Tigers took a road trip to Hull on Sunday night to take on the Pirates in an NIHL National Division game. Tigers went into the game off the back of a gruelling 5-3 victory over Leeds Chiefs the previous evening in Telford. Tigers last game against Hull was a narrow 6-5 victory at home and any repeat of that result would have to be done the hard way, as the team were still without a long list of players through injury, with Jason Silverthorn, Jonathan Weaver, Ricky Plant, Adam Taylor, Joe Aston and Ollie Lord all sidelined. Tigers also lost Brandon Whistle from the Leeds victory, leaving the team short benched for the clash with the Pirates. Although, coach Tom Watkins was able to add Tigers 2 players Jordan Jolly, Brandon Anderton and Liam Preece.

Brad Day started in goal for Telford with Ashley Smith in the nets for Hull.

Tigers were given an early power play chance after Lee Bonner was called for charging but whilst Tigers had the puck and before the whistle was blown, a further penalty should have been called for tripping which was missed by both referees. But, Tigers could not take advantage of the extra man.

Hull penned Tigers in their defensive zone for much of the first 10 minutes with Peter Fabus going close with a shot that rang off the post. In the 13th minute, Tigers’ failure to clear the zone caught them out when Bonner had a clear sight of goal and buried the puck past Day to open the scoring. Tigers finally managed to get the puck away from their goal and equalised in the 15th minute. Dominik Florian superbly drew the Hull defence and net minder, before slipping a perfect pass to Dan Mitchell who fired the puck into the open goal. Just as Tigers were starting to get into the game, Hull regained the lead. Bonner scored his 2nd on the night with a powerful shot past the screened Day. But, Tigers responded immediately, just 13 seconds later, Andy McKinney scored with a stunning shot into the top corner of the goal to silence the Hull crowd. The final chance of an entertaining period fell to Bobby Chamberlain, who went clear on the Tigers’ goal but Day pulled off a magnificent pad save to deny him.

Hull scored a 3rd goal early in the 2nd period with Tigers once again guilty of not clearing the puck from their zone, allowing the unmarked Chamberlain to back hand the puck past Day from in front of the goal. Both referees called a number of penalties that bemused both sets of fans. McKinney was called for tripping and Chamberlain for a cross check, closely followed by Jed Moreland for tripping and Lee Haywood for slashing.

Tigers equalised for a third time in the 30th minute when good work by Moreland and Thomas McKinnon gave Jack Watkins a tap in from close range.

Tigers rued their luck even further when Danny Rose’s slap shot hit the post and bounced out and was closely followed by a Florian shot that rang off the cross bar with Smith beaten.

Hull scored a 4th goal in the 36th minute, whilst on the power play after Moreland took his 3rd visit to the penalty box, for tripping. Jason Hewitt beat Day with a low wrist shot.

At the end of the period Corey Goodison and Jordan Fisher dropped the gloves and both received fighting penalties. But, Fisher received an extra penalty for a cross check meaning Tigers would start the 3rd period on the power play.

Within a minute of the restart, Tigers were level for a 4th time. Scott McKenzie was given far too much space by the Hull defence allowing McKenzie to skate in on goal and slide the puck low past Smith to tie the game.

Day continued to frustrate Hull as he pulled off two terrific pad saves and then a glove save when it looked like Hull were certain to score.

As the game entered the final stages a penalty was called against McKinney for tripping. The Tigers forward took exception to the call and argued all the way to the penalty box as he felt that his hit was fair. Tigers saw out the final minute of the game short handed to guarantee the team a point, as the contest went to overtime. Crucially, Hull had a minute of power play carried over into the sudden death overtime period. The extra attacker proved too much for Tigers to deal with as Hewitt scored 56 seconds into overtime to win the game for Hull. Despite losing the game it was a magnificent effort by the short benched Telford side, which was appreciated by the Tigers’ fans in the crowd as they applauded the players off the ice.

After the game, Head Coach, Tom Watkins commented, “It was a tremendous effort from the boys with such a depleted roster, the team did us proud tonight. To come away with a point tonight is a huge result on the road and against one of the most talented teams in the league. With 7 guys out of the line up last night and 8 guys tonight we were up against it all weekend. We killed penalty after penalty last night and were on the penalty kill for nearly half the game which takes away energy when you’re playing short, so going into the game tonight we were naturally concerned if we had the legs. We brought up Brandon Anderton, Liam Preece and Jordan Jolly from the D2 team to fill out the line up. They all played regular minutes and did a great job for which we’re very grateful. We’ve shown our resilience and character over the last few weeks, which has been remarkable at times but we need some bodies off the injury list and back on the team sheet as quickly as possible.”

Hexagon Telford Tigers 1 will next be in action on home ice on Saturday, 10th November against Hull Pirates. Match Night tickets available to purchase here!