Tigers Claw Their Way to the Top 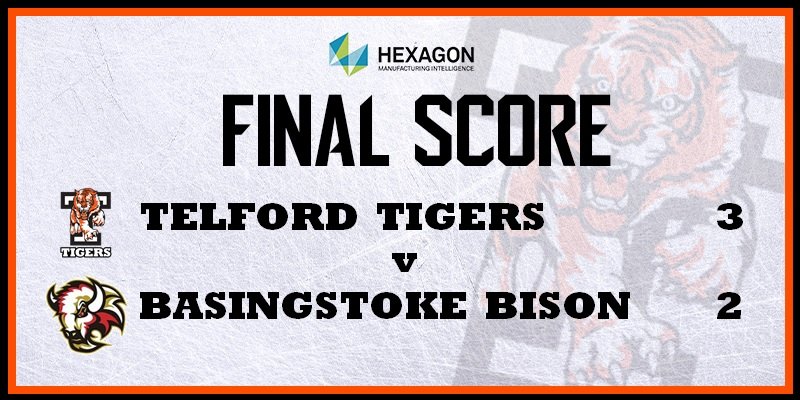 Hexagon Telford Tigers faced off against Basingstoke Bison on Sunday night at Telford Ice Rink. Tigers had taken top spot in the league the previous evening after a 5-2 road win against Milton  Keynes Lightning.

Tigers iced a full roster of players with the exception of Jason Silverthorn, who missed out through injury.  Brandon Whistle made his home debut after signing for the club earlier this week. Alex Mettam started in goal for Basingstoke with Brad Day in goal for Telford.

Basingstoke were handed a glorious chance in the opening minute when Michal Klejna shot over the goal from close range. The game was feisty from the first whistle with both teams showing aggression in their hits. Basingstoke’s Hallam Wilson took it one step too far when he was called for a check to the head and given a 2 minute penalty and a 10 minute misconduct. On the subsequent power play, Andy McKinney hit the post but could not force the rebound home.

Klejna was then presented a further opportunity to break the deadlock when Corey Goodison’s misplaced pass found him in space but he was unable to get his shot on target. Basingstoke were again penalised for a check to the head, this time George Norcliffe caught James Smith and was sent to the penalty box for 2 minutes. Tigers capitalised on the man advantage when Jonathan Weaver’s shot from the blue line was tipped by Ricky Plant through Mettam’s legs into the net to give Tigers the lead.

Basingstoke went close again in the 16th minute after Day saved an initial shot but then lost his net and was bailed out by a shot block from Danny Rose.

Klejna was clearly getting frustrated and showed considerable disdain towards the officials after he thought they had missed a penalty and slammed his stick repeatedly on the ice before storming off the ice.  Shortly after, Klejna was cross checked by Ross Kennedy and the officials called the penalty with only 5 seconds of the period left, meaning Tigers would have to kill off the penalty at the start of the 2nd period.

Basingstoke’s Adam Jones went close on the power play with a shot that hit the side of the goal but Tigers managed to see out the man disadvantage. Telford dominated the next 10 minutes with Mettam proving a one man wall. Despite the constant Tigers’ pressure, Basingstoke levelled the game in the 33rd minute with a long range shot from Josh Kelly. Tigers continued to have the lion’s share of possession but couldn’t score and the period ended 1-1.

Tigers started the 3rd period in the best fashion by regaining the lead. Dominik Florian skated in on goal and passed across to Scott McKenzie to apply the finish with a powerful wrist shot.

Tigers then had to kill off a 5 on 3 power play when McKenzie was called for hooking closely followed by Rose for tripping. Day made another terrific save from Klejna and Tigers were able to see out the power play.

Basingstoke drew level for a second time in the 56th minute. Bayley Harewood hit a shot that was too powerful for Day and went through him and into the net.

As the game entered the final 30 seconds, Tigers controlled the puck in the offensive zone and Ollie Lord worked it to Kennedy on the blue line. Kennedy shot along the ice into the bottom right hand corner of the goal, beating the unsighted Mettam to win the game.

Tigers’ victory keeps them top of the early league standings and gives them a 2nd consecutive 4 point weekend.

After the game, head coach Tom Watkins commented, “I would have liked to have given ourselves a bigger margin after the first period as I thought we came out very strong but Alex Mettam was solid for the full 60 minutes tonight. I liked the spirit we have in this team as we could have lost an opportunity to take the points when Basingstoke equalised to make it 2-2, but again we found a way to secure the points. I’ve got to credit the whole team again tonight, they continue to play hard, they play hurt and keep grinding out results in tight situations.”

Watkins also stated, “The character we showed was really typified by stand-in captain Andy McKinney. He spent most of last night in and again all afternoon today to treat an injury. He only arrived at the rink minutes before warmup and went out there and competed as hard he did. The guy has got a huge heart and all of this after the sad news of his dad passing away only last weekend. I tip my hat to him, I’m very proud of him, he’s a credit to our club and his family.”

Hexagon Telford Tigers 1 will next be in action on home ice this Saturday, 19th October against Sheffield Steeldogs. Match Night tickets available to purchase here!