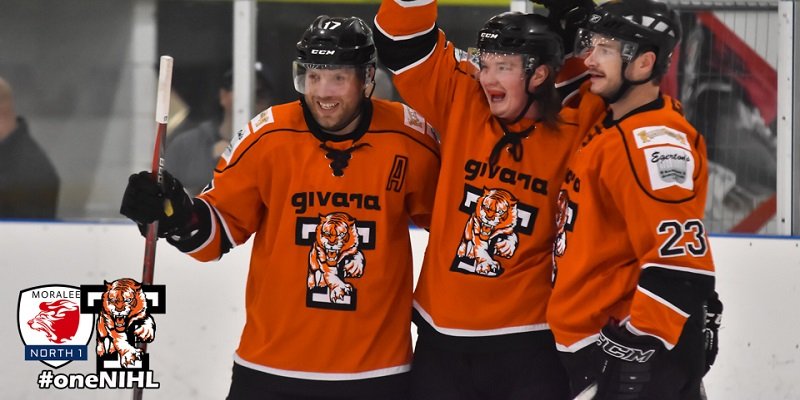 Telford Tigers 1 continued their NIHL North Division One campaign at home to local rivals Solihull Barons on Sunday night.  Tigers came into the game with a 100 percent league record, having continued their fine form this season with a 4-3 road win against Billingham Stars on Saturday.

Tigers were again without the suspended Jonathan Weaver.

Tigers got off to a great start when, in the 6th minute, Jack Watkins opened the scoring after terrific stick work from Joe Miller, who beat two Solihull defenders to allow Watkins to fire home with a powerful slap shot from the hash marks.  A minute later ex-Tigers player Marcus Maynard took a high sticking penalty to give Tigers a power play. Tigers took full advantage after only 7 seconds of the power play, with Jack Watkins scoring his second of the night picking up the rebound from Danny Rose’s shot. Solihull applied some pressure but a great double save by Tigers’ net minder Dennis Bell in the 9th minute kept Solihull off the scoresheet.

In the 18th minute Tigers scored their 3rd of the period, with player coach Tom Watkins scoring his first of the season tapping home from in front of the goal after Jordan Stokes’ shot was saved. Tigers ended the period dominant

The second period started in similar fashion, with a fourth goal arriving just 24 seconds into the period. Joe Miller tipping in from Silverthorn’s pass. Tigers had further chances with Adam Taylor going close on the breakaway and then Silverthorn hitting the bar with a wrist shot shortly after.  Tigers went into the break leading 4-0 and looking comfortable.

The third period was a lot closer, with Tigers players clearly tired from the long road trip and 2 games in 2 days.  Solihull scored in the 44th minute though another ex-Tiger Tom Soar, beating Bell with a wrist shot low into the net. Soar then scored his second less than a minute later to draw the Barons to within 2 goals.  The rest of the period was scoreless but did see a game penalty for Solihull’s Josh Bruce for kneeing, resulting in Tigers ending the game with a 5 minute power play, but despite a number of chances, Tigers could not add to the score. Tigers win giving them a 4 point weekend and top position in the league.

Man of the match – Jack Watkins

After the game Tigers Player Coach Tom Watkins said, “For the first 2 periods I thought we were excellent, we were able to attack with speed and generate a ton of offence. Watkins added, “In the third period we were guilty of a couple of basic errors that they were able to capitalise on”.