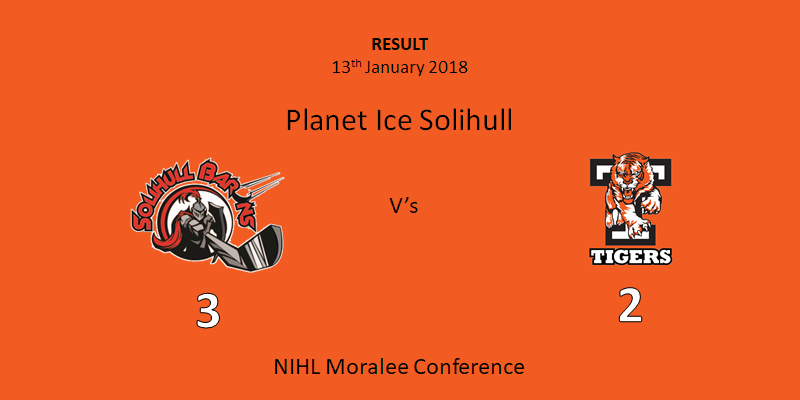 Telford Tigers 1 travelled to Solihull on Saturday night to take on the Barons in an NIHL Moralee Division game for the final time in the league this season. Tigers had won the 3 previous meetings with their local rivals. The last game between the two sides had been noteworthy for Barons’ net minder Daniel Brittle after being ejected from the game and Solihull refusing to dress a replacement net minder, thus resulting in the game being abandoned with Tigers 3-0 ahead.

Tigers announced the signing of Slovakian forward Filip Supa prior to the game and he was signed in time to make his debut.

Tigers started the game strongly and went ahead in the 11th minute when Scott McKenzie was sent clear by a pass from Jonathan Weaver allowing McKenzie to fire home with a powerful wrist shot to give Tigers a deserved lead which they held until the end of the period.

The 2nd period was a different matter, with Solihull taking over the game. With just 54 seconds of the period gone, ex Tigers player Marcus Maynard scored and that was followed by a goal from Andrew Whitehouse in the 30th minute to give Barons the lead.  Solihull scored their third in the 35th minute when net minder Dennis Bell was screened by his own defender and the shot from Matthew Maurice went through Bell’s legs into the net, giving Solihull a deserved 3-1 lead at the end of the 2nd period.

Tigers upped their game in the 3rd period and had several chances to get back in the game but Brittle stood tall in the Barons’ net on a number of occasions.  Ricky Plant finally made the pressure tell in the 57th minute to halve the lead. Tigers pulled net minder Bell for the last minute to add and extra attacker in search of the equaliser, but couldn’t score and tasted defeat for the first time this season against Solihull.

Man of the match – Scott McKenzie

After the game Coach Tom Watkins said, “ I’m disappointed this evening, for 20 minutes we shut off and lost the 2nd period 3-0 and ultimately had too much to do. We gave up two soft goals in the second period, we turned pucks over, we didn’t pick up sticks or box guys out and those mistakes cost us the game.” Watkins added, “We had some great chances in the third but didn’t capitalise, I think we had 3 break aways and on Scott McKenzie’s one, I would have bet my house on him scoring. I’m gutted for the Tigers fans who made the trip today, it was great to see so many come and support us and just a shame we didn’t send them home with two points.”

Later in the evening it was also discovered following a visit to hospital for x-rays that Tigers forward #93 Jack Watkins played over half the game with a broken collarbone.  Jack will be missing for a few games while he recovers and the club wish him all the best for a speedy recovery.