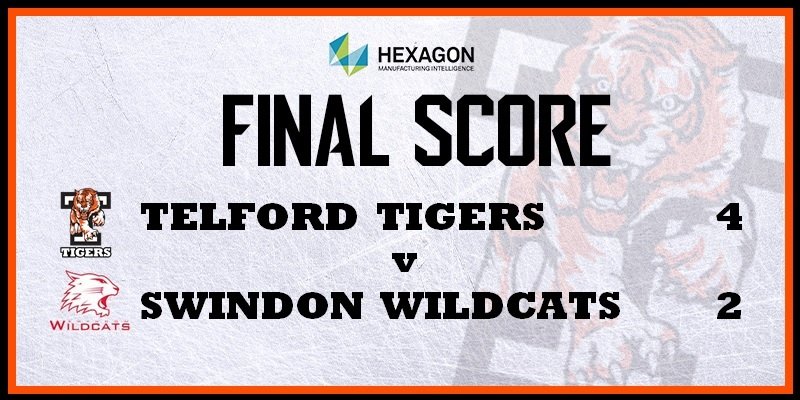 Tigers End Pre-Season with Win. Hexagon Telford Tigers drew a close to their pre-season with a 4-2 win against Swindon Wildcats. The Shropshire side had lost the previous evening to the Wildcats 6-2 and looking to improve their performance and fitness levels ahead of the NIHL National League’s opening weekend next week.

Tigers started the game in much better form than the previous evening and in a fast paced period, had the better of the play. Swindon started a little disjointed and presented a breakaway chance to Andy McKinney in the first minute, but McKinney’s shot was well saved by Tyler Perre in the Wildcats’ goal. Brad Day in the Tigers’ goal was not called on until the seventh minute, saving a deflected shot from Tomasz Malasinski. Tigers then a carved out a chance with slick passing between McKinney and Dominik Florian leaving Scott McKenzie with a shot from ten feet out but his shot was saved by Perre. Telford then had a glorious chance to open the scoring. Jason Silverthorn’s shot was saved by Perre but the net minder lost his footing and fell to the ice leaving an empty net. Tigers’ defender Ollie Lord was first to the rebound but his goal bound shot was blocked in the crease by a Swindon player and cleared. The final seconds of the period saw Tigers come closest to taking the lead. Florian showed neat stick handling skills to create a chance in front of goal, his powerful wrist shot beat Perre but rang off the cross bar and bounced away. Tigers were dominant but unable to break the deadlock.

All Tigers’ good work was immediately undone within a minute of the restart. Swindon forced a mistake from the Tigers’ defence and the failure to clear the puck cost Tigers dear as Aaron Nell passed to Loris Taylor, who shot low past Day to give Swindon the lead. Within a minute, Tigers were presented with a fine opportunity to level the game when Dan Mitchell broke clear and was tripped as he was about to shoot. Referee Hands awarded a penalty shot, but Mitchell’s attempt was well saved by Perre.  Tigers finally got on the scoresheet in the thirty seventh minute, whilst on the power play. Florian’s long range shot deflected in off McKinney. Swindon players appealed to the referee as they thought McKinney had kicked the puck in, but Hands awarded the goal and Tigers were level. Parity lasted less than a minute as Tigers soon took the lead. Florian was again in the thick of things, forcing a save from Perre which led to the puck falling perfectly for Corey Goodison to slam past the unsighted Swindon net minder.

The final goal of the period was a bizarre one and something rarely seen in ice hockey. Tigers were awarded a penalty for a late hit by Ross Kennedy. At the time the penalty was awarded, Swindon were in possession of the puck so the play was not stopped allowing Swindon to remove Perre from their goal to give them an extra attacker. The rules state play is not stopped until an opposition player gains control of the puck. As Swindon cycled the puck to the blue line and shot towards the Tigers’ goal, Dan Mitchell blocked the shot which ricocheted down the ice and into the empty Swindon goal giving Tigers a 3-1 lead at the end of the period.

The third period was more scrappy, with both teams taking a number of unnecessary penalties but none led to goals. As the game entered the final five minutes, Tigers were caught out by a Swindon two on one break which was finished by Edgars Bebris with a neat shot into the roof of the net, reducing the deficit to 3-2. Swindon pushed to gain an equaliser and this was their undoing as Florian led a breakaway and made a perfect pass to the onrushing Mitchell, sending him clear. Mitchell applied the finish with a precise wrist shot past Perre to seal the victory for Telford.

Man of the match: Thomas McKinnon

After the game Tigers’ General Manager and Head Coach, Tom Watkins commented, “I’m sure that was a good game of hockey to watch for the fans! I think both teams played hard, the guys showed how hungry they are, battling and blocking shots which is great for the league moving forward.

You have to come to play every shift and if you fall asleep you’ll get punished.

We’ve still got plenty to do and improvements we can make which will take time. We have a number of new guys who are settling in and not just new to the team but also to the league so I was pleased to see them make a positive impact tonight. I like the energy we played with as a team.”

Check out all the latest results and the next Tigers Fixtures.
Keep up to date with all the tiger news on Facebook and Twitter