Telford Tigers 2 ace it against Altrincham! 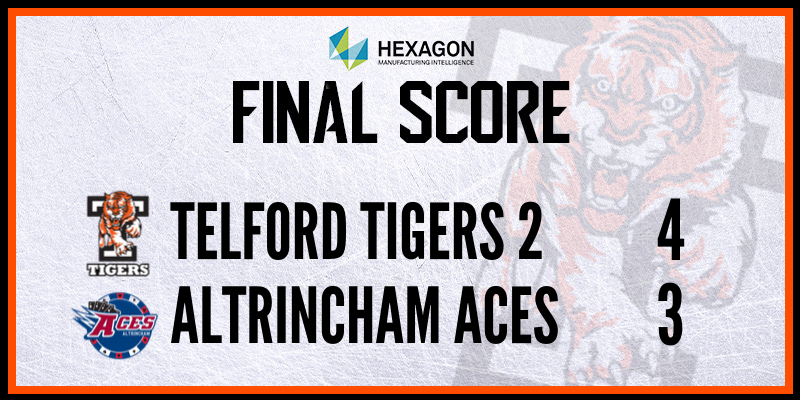 Telford Tigers 2 started their 2019/20 League Campaign the right way last weekend with their first victory of the season on home ice, against Altrincham Aces.

The game had a respectable pace right from the puck drop and unfortunately for Tigers 2, it was the visiting team who took the lead within the first 8 minutes of the game.  The Aces took advantage of the one goal lead and dominated the ice for the first period, denying Telford Tigers 2 an equalising goal. A fairly ‘clean’ period only saw one minor penalty given to Aces’ Ainsworth; a powerplay opportunity Tigers were unable to capitalise on leaving the Aces take the one goal lead into the second period.

The puck dropped for the second period and Tigers 2 were strongminded to find an equalising goal which they did when #59 Jordan Jolly found the back of the Aces’ net at 26:25; assists from Preece and Price. Tigers 2 defenceman, Matt Price then took advantage of a powerplay opportunity following Aces’ second penalty of the game, adding a second Tigers goal to the scoreboard at 32:20. This was shortly followed by a short-handed goal from #77 Dan Thomason at 33:16. The second period ended in Tigers 2 favour, 3 goals to 1.

With a much stronger second period for Tigers 2; the Aces were determined to rain on the Tigers parade and find some winning goals. Within 4 minutes of the puck dropping for the third period, the Aces found themselves a second goal and were within reaching distance of an equalising third goal; which to the Tigers frustration they found at 55:09. With less than five minutes remaining in the game, both teams were digging for that goal which would preclude an overtime battle…

Much to the host team’s delight; Telford Tigers 2 import, Filp Supa managed to bag the Tigers fourth goal of the game, giving them back that one goal lead which they clenched on to until the final buzzer sounded. It was a great opening game for both teams, with Tigers 2 netminder Matt Draper making his debut start for the Laidler side.

Telford Tigers 2 Assistant Coach, Dougie Wildman was pleased with the overall performance of the team and commented;

“It was good to get the first game out of the way and come away with the first win of the season at home. First game nerves were apparent in our play when Altrincham started strong and matched us shot for shot in the first period and finished the best chance of the period to end it 1-0 to them.”

Tigers 2 picked things up in the second period, taking back control of the game.

“We came out with a fire lit under us for the second and dominated in most areas of the ice, whilst starting to settle as a team and find the net 3 times. Again, the third period started very similarly, but we seemed to take our foot off the gas and let Altrincham back into the game. Our Goalie Matt Draper, on his debut start, made some fantastic saves to keep us in it until we closed the deal scoring the winner and sealed the deal.

We had a fantastic crowd on Saturday night cheering the boys on which definitely helped us to victory!

All in all, we were pleased with the result but we know we can play much stronger than we demonstrated at the weekend. We will use the next training session to get ready for our first double header of the season this weekend coming where we entertain Sheffield on Saturday at home and are away to Deeside on Sunday.”

Telford Tigers 2 will next be in action on home ice this Saturday against Sheffield Senators. Match Night tickets available to purchase now here!