Tigers Fail to Ride Out The Storm 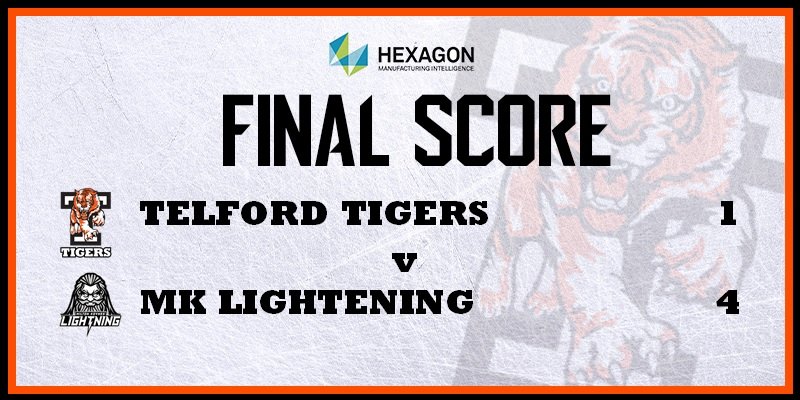 Tigers Fail to Ride Out The Storm. Hexagon Telford Tigers faced off against Milton Keynes Lightning on Sunday night at Telford Ice Rink. Tigers had lost the previous evening, in overtime against Leeds Chiefs and had lost their last home game. Tigers were without the injured Jonathan Weaver, Scott McKenzie, Brandon Whistle and James Smith through injury but added Sam Watkins to the lineup.

The game started in feisty fashion with Milton Keynes’ Tomas Kana and Thomas McKinnon both sent to the penalty box in the first twenty seconds of the game after they clashed at a face-off. Both were awarded delay of game penalties. Milton Keynes were trying to make the game a physical battle and referees Hands and Wells both missed or chose to ignore, a number of late hits early on.

Tigers broke the deadlock in the fourth minute with Jason Silverthorn opening the scoring with a neat backhanded wrist shot from the right circle which beat Lawday low down.

The officials continued to draw the Tigers’ fans ire with a call on Danny Rose infuriating the home crowd after a clear infraction in the Tigers’ defensive zone was ignored but Rose was given a penalty for his retaliatory reaction. Whilst on the penalty kill, Dominik Florian was hooked heading into the Milton Keynes zone but again, no call came.

Tigers then missed a glorious chance to take the lead after gaining a 5-on-3 power play when Leigh Jamieson and Kana were sent to the penalty box. However, the power-play unit struggled to get any fluidity to their passing and barely created a chance of note. Tigers were then punished almost immediately after the power play ended by gifting a goal to Milton Keynes.  Tigers had the chance to clear the puck after a face-off but ended up giving a free shot at goal to the unmarked Liam Stewart who buried a wrist shot off the crossbar and into the net to put the Lightning ahead, a lead they held at the end of the first period.

The second period started with further calls not being called by the officials and Tigers’ fans getting more and more irate. This was made worse when a call was finally made but against Tigers’ Dan Mitchell for slashing. Milton Keynes extended their lead on the subsequent power play. Cale Tanaka squeezing a shot through Day which trickled into the net for Lightning’s third goal.

The players were feeling frustrated with both their own performance and that of the officials and this all came to a head in the thirty-second minute with an incident that sparked a bench clearance. Tigers’ Danny Rose objected to a late hit on a Tigers’ player and confronted Lightning’s Jamieson, sparking a brawl which saw Jamieson hit Rose whilst he was prone on the ice. Andy McKinney went after Jamieson and was intercepted by Grant McPherson resulting in the two fighting each other on the Tigers’ blue line with McKinney handing McPherson a lesson in how to fight. Both teams’ players left their benches and several fights broke out across the ice. After a long delay whilst the officials debated what penalties would be called, they decided to eject McKinney, Rose and McKinnon for Tigers with Jamieson, McPherson and Tom Carlon ejected for Lightning. Carlon infuriated the home crowd further as he skated off by stupidly making an obscene gesture to the fans. Also thrown out of the game were Tigers’ coach Tom Watkins and Lightning coach Lewis Clifford, for failing to control their players.

The result of the penalties were that Tigers were left with only three defenders, with forward Adam Taylor having to help out in defence. Shortly after the game had restarted, the officials left the home crowd in disbelief when a clear tripping call on Ben Russell was given but offset by Dominik Florian being called for simulation, despite Florian clearly being tripped.  The period finally ended with Tigers trailing by two goals and a mountain to climb.

The third period passed by without any further incident and, despite Tigers constantly trying to force their way back into the game, Milton Keynes killed the game off with a goal from Kana.

Despite Tigers’ defeat, they hold a five-point lead over rivals Swindon after the Wildcats lost 3-2 to Bracknell earlier in the evening.

Man of the match: Ricky Plant

After the game Head Coach Tom Watkins, commented, “It was not the result or performance we were hoping for but with five players out of the line-up, two of which are our offensive players it was difficult to generate much quality in front of goal. After that, we simply made individual and collective breakdowns in the defensive zone that led to us conceding poor goals.

Our 5-on-3 power play was pathetic and only generated one shot on goal. There are lots of things about last night’s game to be disappointed about and I could say a lot more but I think it’s best to focus on next week.”

Hexagon Telford Tigers 1 will next be in action at home on Sunday 16th February against Bracknell Bees. Match Night tickets available to purchase here!