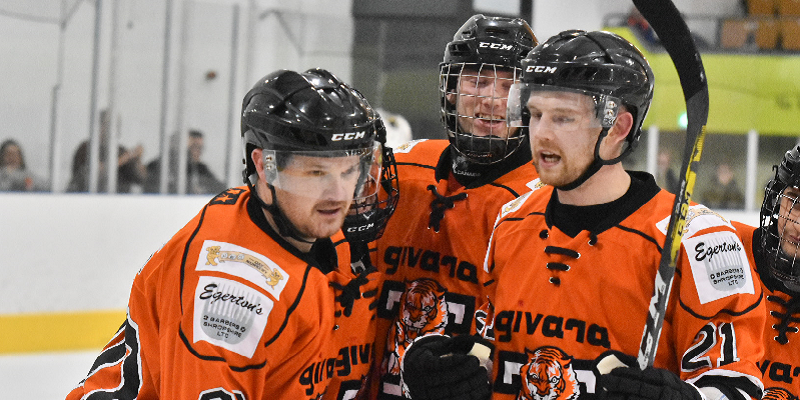 Telford Tigers 1 took on Hull Pirates at Telford Ice Rink on Sunday night in the NIHL Autumn Cup.  Sadly for Tigers the game was a dead rubber as Hull’s point against Swindon (in an overtime loss last Sunday) meant that Tigers were already out of the cup at the group stage and would not progress to the knock out stage regardless of the result.

Tigers welcomed back coach Tom Watkins who had completed his 2 game suspension in Saturday night’s 3-0 win over Solway Sharks.

The 1st period was a scrappy affair with few clear cut chances, the best for Tigers coming whilst shorthanded, with Joe Miller’s breakaway being thwarted by a good pad save by the Hull net minder Zack Brown.

Tigers struck first in the 2nd period in the 30th minute, coach Tom Watkins chased down a seemingly lost cause and managed to poke the puck into the net to give Tigers the lead.  Hull responded when Lee Haywood scored a wrap around goal to level the game. Tigers thought they had scored in the 36th minute after Jason Silverthorn and Joe Miller had a 2 on 1 breakaway, with Silverthorn firing home after some neat passing. However, referee Brooks ruled that the net was off its moorings and disallowed the goal.  This would prove to be crucial as Hull scored on their next attack when a blue line shot was deflected past Tigers’ net minder Sam Hewitt by James Archer.  Tigers then went further behind when Hull’s Bobby Chamberlain collected a rebound from his own shot to score and give the Pirates a 3-1 lead at the end of the period.

The 3rd period saw Tigers firmly out of the game in the 47th minute with Lee Bonner adding a 4th goal.  Tigers then saw Jed Moreland’s shot hit the bar and shortly after, Hull added a 5th goal through Chamberlain who scored his second of the night. Tigers then had two separate 5 on 3 power plays in quick succession but could not score. Tigers luck was then summed up when Adam Taylor’s wrist shot rang off the bar.  Hull finished the night with a 6th goal when Archer got his second, to cap a miserable night for the Telford faithful.

Man of the match – Tom Watkins.

After the game coach Tom Watkins said, “It was a tough night at the office this evening. That was the back end of 5 games in 9 days for us and the last 4 were on the road with us also playing short benched. We didn’t deserve the points this evening and although we created some scoring chances, we failed to capitalise on them and made some tired mistakes on the puck. We had extended 5 on 3 time and didn’t make a difference.” Watkins added, “I’m not going to dwell on tonight and would prefer to look forward as we are playing some tough opposition over the next few weeks.”