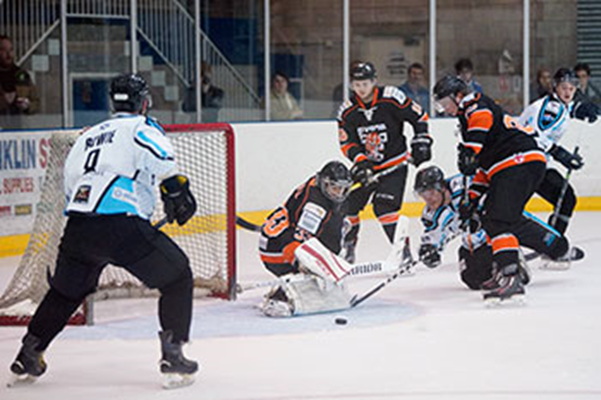 Telford Tigers 1 took their longest road trip of the season to Dumfries Ice Bowl in Scotland to take on the Solway Sharks on Saturday night in an NIHL Moralee Division game. Tigers were going into the game off the back of 5 straight defeats after losing to Swindon Wildcats on Wednesday in the National Cup and the recent league victory over Blackburn Hawks being overturned due to an infringement for failing to have the required non-playing Level 2 coach in charge of the bench for the game.

Tigers were still without Jonathan Weaver and this game saw coach Tom Watkins serve the final game of his 2 game suspension.

The first period was an even affair and Tigers waited until the 13th minute to get off the mark, Jason Silverthorn firing home from Dale White’s pass.  Tigers then increased the lead in the final minute of the period with Jack Watkins scoring to leave the team 2-0 ahead at the end of the 1st period.

The second period was similar to the 1st with both teams having chances and the game being end to end, but there were no further goals.

However, the 3rd period was only 22 seconds old when Tigers added a 3rd goal, Captain Silverthorn getting his 2nd of the night.   Solway still threatened and they were unlucky when they hit the post. Shortly after, net minder Dennis Bell made a great save on a 1 on 1 breakaway to ensure another shut out.  Tigers seeing out the game to maintain top position in the league.

Man of the match – Dennis Bell.

After the game coach Tom Watkins said, “I was pleased with the win tonight, Solway have a good record at home, but I thought we put on a clinical performance and took our chances well. We looked pretty solid and moved the puck well.” Watkins added, “It’s always nice for the team to record a shut out and it was a well deserved win.”