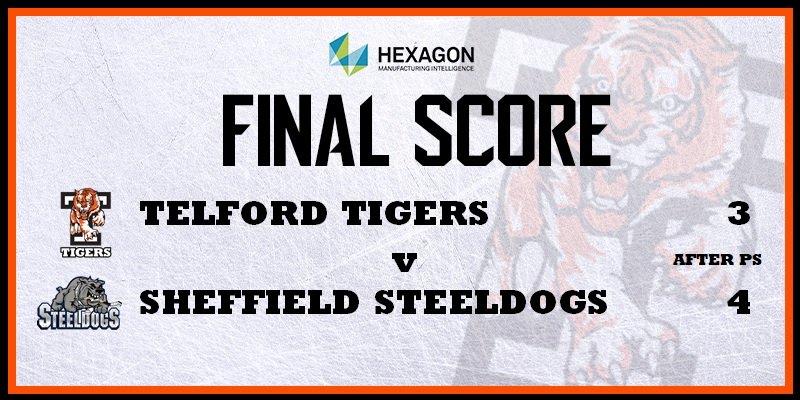 Tigers Fall to Shootout Loss. Hexagon Telford Tigers returned to league action on Saturday night against Sheffield Steeldogs at Telford Ice Rink. Tigers had played the first leg of the National Cup Final the previous evening and won a thrilling contest 6-4 to give Tigers a lead ahead of the second leg in Telford next Wednesday. Both games saw the return of Tigers’ defenseman Jonathan Weaver from long term injury. The power-play unit was grateful for the return of Weaver who scored twice for Tigers in a terrific road win against Peterborough and Tigers’ fans welcomed him back on home ice this evening with a rousing reception.

Tigers had taken four points from their last two games and had beaten Sheffield last Sunday with just six seconds of the game left. Jason Silverthorn scoring the game-winner in the dying seconds of overtime. Tigers’ lead at the top of the table had been reduced to five points by Swindon winning in Basingstoke on Friday but both teams had now played the same amount of games.

Starting in goal for Telford was Brad Day, Dimitri Zimozdra started for Sheffield.

Tigers made a bright start to the game and should have scored in the opening minute. Brandon Whistle set up Scott McKenzie in front of goal but the Tigers’ forward shot wide when well placed.

Sheffield then missed a glorious chance to score, Ryan Johnson, shooting over the goal when presented with an open goal from close range.  Tigers had constant pressure on the Sheffield goal and finally broke through in the twelfth minute.  Sheffield’s Tim Smith was called for tripping but as Tigers had possession of the puck, play continued. Day left the Tigers’ goal to add an extra attacker. McKenzie skated onto the ice and timed his appearance in the Sheffield offensive zone to perfection, meeting Dominik Florian’s pass, taking control of the puck, beating a defender and shooting low past Zimozdra into the net.

Tigers made a sluggish start to the second period and had Day to thank for two terrific saves from James Spurr and then Jan Danecek. McKenzie then went close with a shot that rang off the crossbar and bounced to safety. Midway through the period, Sheffield equalised with a controversial goal. Day made a save but did not cover the puck causing a goalmouth scramble which saw all five Sheffield players in the goal crease. Somehow Referee Wells managed to see through the mass of bodies to see that Nick Oliver had covered the puck in the goal crease and awarded a penalty shot to Sheffield. Vladimir Luka took the shot and beat Day with a well-placed wrist shot. Tigers ended the period in the ascendancy but level on the scoreboard.

Tigers started the third period in perfect fashion by taking the lead. Adam Taylor’s shot from the blue line was tipped past Zimozdra by Sam Watkins for his first-ever senior goal. However, Tigers’ luck changed for the worse shortly after when Dominik Florian accidentally caught Sheffield’s Charles Thompson with a high stick, drawing blood, which resulted in Florian being ejected from the game and Sheffield receiving a 5-minute power play. Less than a minute into the power play, Sheffield equalised with a goal from James Spurr and shortly after took the lead with Luka scoring his second of the night with a powerful wrist shot low past Day. Tigers were chasing the game and entered the final ten minutes of the contest a goal behind as news of Swindon’s overtime loss to Basingstoke filtered into the rink, the team knew that a goal was vital to maintain the lead at the top. With two minutes left, Tigers’ coach Tom Watkins called a timeout and rallied the team. Tigers pulled Day from the goal to add an extra attacker. McKenzie passed from centre ice to Whistle who skated into the Sheffield offensive zone and hit a stunning wrist shot in off the post and into the net to draw the sides level and send the game to overtime.

Sheffield almost won the game off the opening faceoff in overtime. Nathan Salam hitting the crossbar with a powerful shot. Tigers almost snatched victory in the final seconds with Jack Watkins being denied by Zimozdra with a brilliant save from close range. The teams could not be separated so the game went to a penalty shootout.

Tigers’ McKenzie went first but shot straight into Zimozdra’s glove. Danecek went next and scored. Adam Taylor’s shot was saved and Salem was denied by Day. Whistle stepped up for Tigers and had to score to keep the shootout alive but was denied by Zimozdra, winning the game for Sheffield.

Tigers pick up a point and hold a 5 point lead over second-placed Swindon with both teams having four games left to play.

After the game Head Coach Tom Watkins, commented, “We struggled to find our legs tonight and never really established ourselves as a threat in the game which was disappointing. Fundamentally we can be better but well done to Sheffield. A point is a point which we’ll gladly take. I thought when Sam scored his first senior goal, early in the third period, it would be a catalyst for us. It was a great little redirect tip going to the net, all the boys were really pleased for him and it certainly gave me a huge sense of satisfaction as his Dad. He’s played very well over the last 3-4 games and today I felt he was one of our smartest guys out there. We face another big game tomorrow, our third in three days. I’d like to give thanks for the support to our fans tonight.”

Hexagon Telford Tigers 1 will next be in action at home on Wednesday 11th March against Peterborough Phantoms. Match Night tickets available to purchase here!