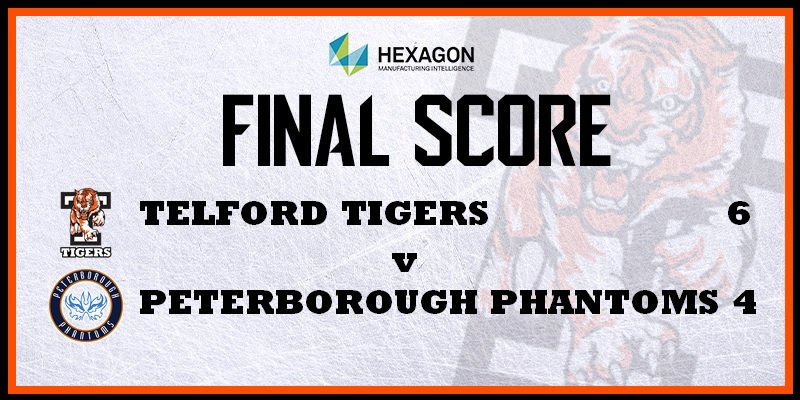 Tigers’ Late Show Gives Silver-Lining to Victory. Hexagon Telford Tigers faced off at Telford Ice Rink against third-placed Peterborough Phantoms in a vital NIHL National League game. Phantoms came into the game on an eleven game winning streak and their run of good form had seen them close the gap on the Tigers to six points.  Tigers were relieved to be able to ice Ross Kennedy after the defender landed heavily in his previous match and had to leave the game. Tigers were without the suspended pair of Andy McKinney and Thomas McKinnon and also the injured Dan Mitchell, James Smith and Jonathan Weaver.

The game started at a fast pace with both teams using their speed. Tigers dominated the opening five minutes of the contest and took the lead. Good work by Scott McKenzie and Brandon Whistle led to the puck being recycled to the Peterborough blue line where Ollie Lord hammered a low shot that flew into the bottom corner of the net with Marr unsighted. Peterborough always looked dangerous on the break and Tigers were thankful when a Corey McEwan shot deflected onto the top of the crossbar and bounced away. But Tigers weren’t as lucky with the next Phantoms’ attack. McEwan set up Petr Stepanek whose shot hit Day but was too powerful to save, as the puck dropped behind Day and into the goal to draw the sides level.

Peterborough took the lead early in the second period. The Phantoms broke into the Tigers’ defensive zone and Glenn Billing fired a wrist shot into the top left-hand corner of the net.  Tigers responded with a sensation goal just over a minute later. Brandon Whistle skated around the Peterborough defence then in on goal and lifted the puck over Marr into the roof of the net.  Both teams traded chances but it would be Tigers who retook the lead. Corey Goodison did well to keep the puck in at the Phantoms blue line and hit a slap shot which deflected to Whistle who hit a superb wrist shot which was deflected past Marr by Dominik Florian.  Peterborough replied within a minute to level the game once again with McEwan tipping a Tom Norton shot past Day. Five minutes from the end of the period, Tigers scored the fourth goal. Whistle’s shot rebounded off Marr allowing the perfectly positioned Scott McKenzie to tap the puck home. A breathless period ended with Tigers a goal ahead in a finely balanced game.

Peterborough refused to back down and pressured Day in the Tigers’ goal at the start of the third period. Eventually, the pressure paid with Billing scoring his second of the night with a wrist shot over Day’s shoulder to draw the teams level.  The game, and Tigers’ lead at the top, was in the balance. Both sets of fans were roaring their team on but it would be the Tigers’ fans who celebrated next. Ricky Plant won a centre ice puck battle and passed the puck to the Tigers’ captain Jason Silverthorn who was clear on goal. Silverthorn controlled the puck while fighting off the attempts of a Peterborough defender and shot past Marr to put Tigers ahead 5-4.

The game was tense and the Phantoms knew they couldn’t afford to lose the game and threw everything at the Tigers’ goal. Tigers’ defence was superb – blocking shots, denying the Phantoms’ forwards space and clearing pucks out of their defensive zone. Marr was pulled from the net for the final minute and Peterborough were angry when a Florian clearance was not called as icing, allowing Tigers to change their lines and take another twenty seconds off the clock.  As time ticked away Whistle intercepted a Peterborough pass, found Plant who skated into the Phantoms’ offensive zone and passed to Silverthorn to slide the puck into the empty net to seal the victory and send the Tigers’ fans wild in celebration.

Tigers’ victory was made all the sweeter when news of Swindon’s defeat at home to Milton Keynes Lightning filtered into the rink, meaning Tigers’ lead had increased to five points with six games left to play.

Man of the match: Brandon Whistle.

After the game Head Coach Tom Watkins commented, “It was a big win. I was pretty anxious going in tonight’s game as I felt it was a pivotal game for us against a team who have been on fire lately and have put a very impressive run together.  I asked the team to bring a winning mentality tonight and they did just that. The game was very close, very tight all night, we saw two very well matched teams that played hard at both ends of the rink. We took our chances well in those key moments and defended with commitment. I thought the officiating was first class this evening, the referees let the two teams play and that impacted the game in the right way.”

Watkins also stated, “Pre-game we held a minute’s silence for young linesman Haris Hussain who sadly died recently. It is such a sad loss of a young guy at just 19 years of age, it puts it all into perspective. All of our thoughts and best wishes go to his family, friends and fellow officials.”

Hexagon Telford Tigers 1 will next be in action at home on Saturday 7th March against Sheffield Steeldogs. Match Night tickets available to purchase here!