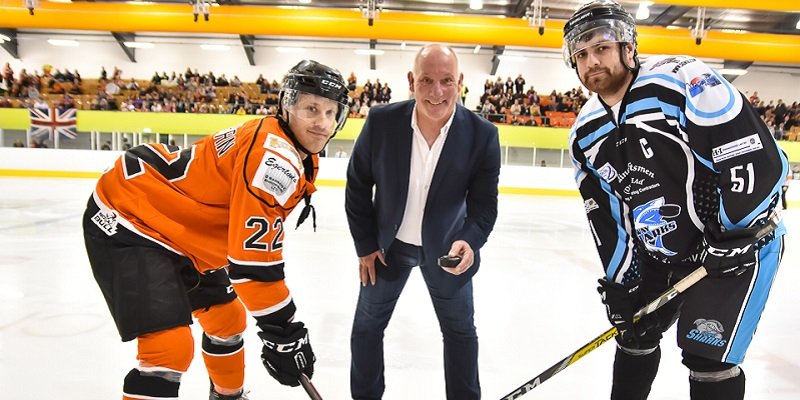 Telford Tigers 1 faced Solway Sharks in an NIHL Moralee Division top of the table clash on Saturday evening at Telford Ice Rink. Both teams were looking to continue their one hundred percent start to the season.

The first period saw Telford score the opening goal, which came in the sixth minute when Joe Miller and Ricky Plant had a two on one breakaway, with Miller making the perfect pass for Plant to slide the puck in at the far post. The second goal was scored soon after, with the Tigers’ top line of Miller, Plant and Jason Silverthorn combining to leave Silverthorn with a tap-in to extend the Tigers’ lead.  Despite the Tigers’ strong play, the period would end level. Solway scoring in the 18th minute through Iain Bowie, after Tigers failed to clear the puck from their defensive zone. Then just thirty seconds later Bowie scored again, taking advantage of a rebound from net minder Dennis Bell to loop a shot in off Bell’s glove.

The second period began with Tigers on the power play but they were unable to make it count. However, in the thirty third minute they took the lead again, with Jordan Stokes scoring a terrific back handed wrist shot into the top corner of the net for his first goal of the season. Solway then had a number of chances and only the brilliance of Bell kept Tigers ahead. He made one save whilst lying flat out on the ice, somehow managing to get his glove to the puck to prevent a certain goal from point blank range. Bell had no chance in the thirty ninth minute, however, when Bowie completed his hat trick on the breakaway with a well placed shot.  Tigers thought they had restored their lead in the final seconds of the period with Miller’s shot from close range, but referee Hamilton ruled the shot had gone in after the buzzer had sounded, leaving the game tied at three all.

The final period was a hard fought end to end battle. Tigers went ahead for the third time in the game in the forty seventh minute after shots by Miller and Tom Watkins were blocked, but the puck found Jonathan Weaver who made no mistake with a powerful shot from just outside the left circle. In the fifty fourth minute Tigers then scored the best goal of the night, with some fantastic passing between Miller, Plant and Silverthorn, allowing Plant to score his second of the night and Miller gain his fourth assist, to kill off the game.

There was still time for Bell to make another crucial pad save to maintain Tigers’ lead. Although Solway battled to the very end, pulling their net minder for the last 40 seconds, they couldn’t add to their total.

After the game Tigers’ Player Coach Tom Watkins said “ Overall I was pleased to get the two points, but I thought we were inconsistent this evening. To end the first period at 2-2 was annoying and allowed Solway back into the game. We fell asleep at the end of that period and to give up two quick goals was poor. We need everybody focused for the full 60 minutes, making sure we play to our strengths”. Watkins added “ I shortened the bench going into the third period, to get our best players on the ice more and it made the difference”.