Tigers Fight Back To Win against Leeds Chiefs. 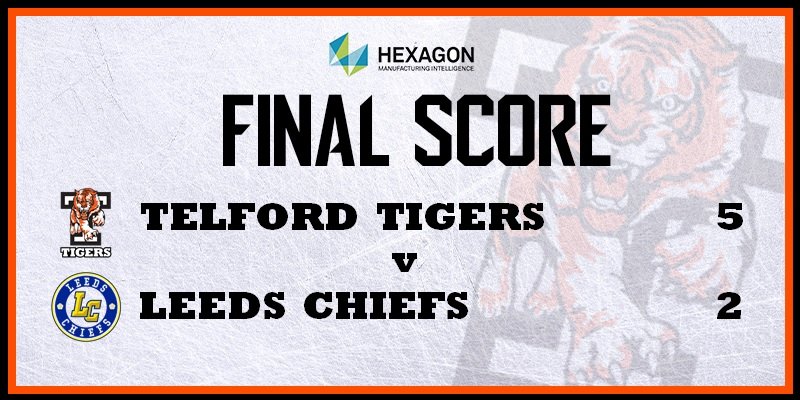 Hexagon Telford Tigers played their first home game in the new NIHL National League against newly formed Leeds Chiefs on Sunday night at Telford Ice Rink. Leeds are coached by former Tigers’ defender Sam Zajac – a member of the double winning team in 2015 – and also featured former Tigers’ net minder Sam Gospel in their line up.  Leeds were playing their second ever game at this level and were still looking for their first win, having lost to Sheffield Steeldogs in their previous league game. Tigers had opened the season the previous night in Basingstoke, losing a thrilling game late on with the Bison edging out Tigers by 7 goals to 5.

Tigers started the game positively, putting pressure on Gospel early on, so it was a surprise when, with their first shot on target, Leeds opened the scoring in the 3rd minute.  Leeds forward Radek Meidl’s shot was parried by Tigers’ net minder Brad Day into the path of James Archer who smashed home the rebound to give the Leeds Chiefs the lead.  Shortly after, both referees Hands and Brooks missed a dangerous hit on Adam Taylor by Leeds’ Ethan Hehir. Danny Rose went after Hehir and was given a penalty plus a further 10 minutes for misconduct.  Despite the numerical disadvantage during this time Tigers equalised whilst . Andy McKinney found Dominik Florian unmarked in front of goal. Florian hit a powerful wrist shot which hit Gospel and spun behind him into the net to level the game. The period became scrappy and dominated by penalties with Archer and Nick Oliver being awarded roughing penalties. In the 12th minute, Leeds regained the lead. Tigers appeared to have broken up a Leeds break but the puck fell to Lewis Baldwin on the blue line and his powerful slap shot beat Day low down to give the Yorkshire team the advantage. Further penalties were awarded to Archer and McKinney as the game started to have an edge to it. Gospel was called on to make a glove save from Oliver’s slap shot.

Tigers drew level for a second time in the 17th minute, when Florian’s shot was saved by Gospel but Taylor was first to the rebound to hammer it home. There was still time for Day to be called into action one final time in the period as Leeds’ Adam Barnes missed a glorious chance after a 2 on 1 breakaway with Archer.

Tigers started the second period without Jason Silverthorn, who had left the game during the first period and did not return. Early in the period, Jonathan Weaver showed all his experience to break up a Leeds attack with an excellent stick check, preventing a Leeds chance.  McKinney was handed an early chance for Tigers, as he was awarded a penalty shot after being hooked when in on goal. Gospel came up big with a pad save to deny McKinney.  The first fight of the night had been coming for some time and it was no surprise when it was McKinney and Zajac who dropped the gloves in the 28th minute. Both received penalties, with Zajac receiving an extra 2 minutes for cross checking.  However, Tigers wasted the subsequent power play.

Tigers took the lead for the first time in 34th minute. Weaver sent a superb pass to Jack Watkins which sent the forward clean through on goal. Watkins showed neat stick handling to go to his backhand and lifted the puck over Gospel and into the net. Four minutes later, Tigers’ lead increased to 4-2. Florian scored his second goal of the evening with a superb low shot past Gospel after creating space himself and beating the Leeds defence to get clear on goal.

The third period started with Barnes hitting the cross bar for Leeds and almost immediately after McKinney hit the post at the other end. Tigers scored what proved to be the final goal of the game in the 49th minute. Watkins passed from behind the goal to Joe Aston who dispatched the puck past Gospel for Tigers’ fifth goal. There was still time for further Tigers’ penalties with Ricky Plant getting 2 minutes plus a 10 minute misconduct for a check to the head and Corey Goodison for tripping but Leeds could not score from their power play chances, allowing Tigers to see out the game and record their first win of the season.

Man of the match: Dominik Florian.

After the game General Manager and Head Coach, Tom Watkins commented, “It was a great game of hockey. We played with a high intensity, were fast and physical.  I was pleased to see us play as a team and play with plenty of grit and the tenacity we showed on our forecheck and back pressure was excellent.

We lost Silvs (Silverthorn) early in the game and took penalties to key guys which had the potential to affect us, but the other players really stepped up tonight. For 40 minutes I think we were dominant, with some really strong displays that complemented our overall team performance.”

Hexagon Telford Tigers 1 will next be in action on home ice this Sunday against Swindon Wildacts. Match Night tickets available to purchase here!